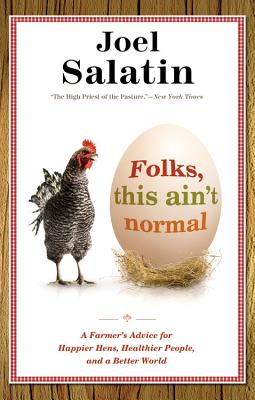 A Farmer's Advice for Happier Hens, Healthier People, and a Better World

From farmer Joel Salatin's point of view, life in the 21st century just ain't normal. In FOLKS, THIS AIN'T NORMAL, he discusses how far removed we are from the simple, sustainable joy that comes from living close to the land and the people we love. Salatin has many thoughts on what normal is and shares practical and philosophical ideas for changing our lives in small ways that have big impact.

Salatin, hailed by the New York Times as "Virginia's most multifaceted agrarian since Thomas Jefferson [and] the high priest of the pasture" and profiled in the Academy Award nominated documentary Food, Inc. and the bestselling book The Omnivore's Dilemma, understands what food should be: Wholesome, seasonal, raised naturally, procured locally, prepared lovingly, and eaten with a profound reverence for the circle of life. And his message doesn't stop there. From child-rearing, to creating quality family time, to respecting the environment, Salatin writes with a wicked sense of humor and true storyteller's knack for the revealing anecdote.

Praise For Folks, This Ain't Normal: A Farmer's Advice for Happier Hens, Healthier People, and a Better World…

"In his new book, Folks, This Ain't Normal, the 54-year-old famer-philosopher emerges as a true American throwback: an agrarian libertarian who wants both Food Inc. and Big Government out of his fields...It's about better food, yes, but what Salatin is really calling for is responsibility: a declaration of independence from corporations and bureaucracy. He wants us to be full citizens of the food system, like the Jeffersonian citizen-farmers who founded the country."—Time magazine

"Joel Salatin might seem like a vision of our agrarian past, but in fact, he's distinctly modern, looking beyond the conventional toward a new "normal" based on community, ecology, and flavor, too. Salatin's book is as practical as it is reflective; as necessary as it is radical."—Dan Barber, Chef/Co-Owner, Blue Hill and Blue Hill at Stone Barns

"Joel Salatin is a down-to-earth 21st century pioneer, one of those rare contrarian thinkers whose words and work have the power to transform the way a generation thinks. 'Folks This Ain't Normal' will help seed the new nature movement and inspire people everywhere -- especially young people in need of some practical hope. And here's the bonus: The book is great fun to read. Sacred cows beware."—Richard Louv, author of "The Nature Principle" and "Last Child in the Woods"

"In Folks, This Ain't Normal, Joel Salatin says it's high time we stopped taking our industrialized food system as a given and instead consider local, sustainable food production as the norm. Good plan. Whether or not you agree with his contention that we would be better off if the government got out of food regulation, his ideas are compellingly written, fun to read, and well worth pondering."—Marion Nestle, Dept. of Nutrition, Food Studies, and Public Health, NYU, and author, Food Politics

"Chances are slim you'll agree with everything in this wonderfully cranky book. But I'm almost certain you'll agree that Joel Salatin has earned the right to his convictions, and that they shine a powerful light on some of the paths out of the predicament we find ourselves in as a world."—Bill McKibben, author Eaarth: Making a Life on a Tough New Planet

"Joel...is one of the most creative, productive and sustainable farmers working in America today...His message is that we eaters can change the world, one meal at a time."—Michael Pollan, in the introduction to Holy Cows and Hog Heaven: The Food Buyer's Guide to Farm Friendly Food