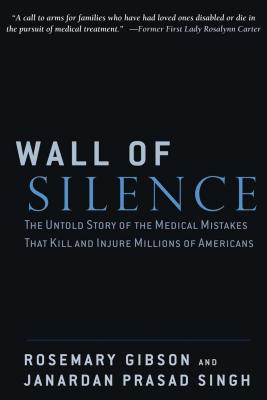 Medical mistakes occur with alarming frequency in this country. Nightly newscasts and daily newspapers tell of botched surgeries, mistaken patient identities, careless overdoses, and neglected diagnoses. You may have dismissed these stories as unfortunate mistakes, misunderstandings, or just isolated incidents with the occasional bad doctor.

Wall of Silence reveals that these medical mistakes are not rare incidents with the occasional bad doctor. In fact, the real-life stories in this book show that medical mistakes are increasing in frequency—and worse, that the system is designed more to cover up these errors than prevent them.

A frequent commentator on cultural issues and parenting, Marybeth Hicks has appeared on national television outlets including Fox News Channel's Hannity and Fox and Friends , the CBS Evening News, the Christian Broadcasting Network's 700 Club and EWTN's The World Over, and on dozens of national and regional radio programs including those hosted by Sean Hannity, Dennis Miller, Laura Ingraham, Jim Bohannon, Hugh Hewitt, G. Gordon Liddy, Brian Kilmeade and others. For nine years, she was a weekly culture columnist for the The Washington Times.
Loading...
or
Not Currently Available for Direct Purchase