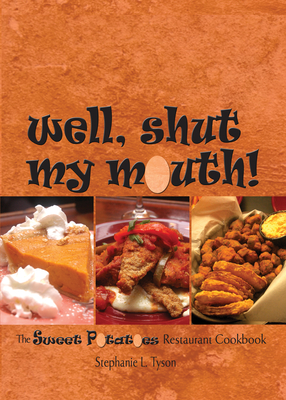 Well, Shut My Mouth The Sweet Potatoes Restaurant Cookbook is recipes--recipes from the restaurant, recipes from the families of chef Stephanie Tyson and co-owner Vivian Joiner, recipes that are Southern, plain and simple. In creating the recipes for Sweet Potatoes, Tyson used all of her influences Geechee flavor from Joiner's father, who was from the Hilton Head area of South Carolina; her mother's working-woman "out of the can and into the pan" shortcuts; and her training in culinary arts at Baltimore International College and her later work in South Carolina, the Florida Keys, Arizona, and Maryland. Just the names of the recipes in this book are enough to whet one's appetite: Pimento Cheese Fondue; Sweet Potato, Corn, and Country Ham Risotto; Gullah Shrimp and Crab Pilau; Slow Cooker Chocolate Stout Pot Roast; Down-Home 'Tata Salad; Molasses Dijon Dressing; Sweet Potato Bread Pudding with Pecan Crunch Topping; and many others. Most recipes include a bit of flavorful commentary from the chef, such as this tip for Spicy Greens: "If you are faint of heart (burn), eliminate the red pepper altogether." Or the brief definition that introduces Crackling Cornbread: "Cracklings are deep-fried crispy skins of various animals--in this case, pork." Well, Shut My Mouth is also the history of the two women who started a locally and nationally acclaimed restaurant (Our State, Southern Living, New York Times). As Tyson says in her introduction, "Every part of me is a part of Sweet Potatoes." In Well, Shut My Mouth she shares a culinary experience that has been a favorite of Winston-Salem natives and visitors for years. Now, patrons have the tools to re-create the Sweet Potatoes dining experience in their own homes.

Stephanie L. Tyson (right) and her partner and co-owner, Vivian Joiner (left), opened Sweet Potatoes in the Downtown Arts District of Winston-Salem in 2004. Both live in Winston-Salem, North Carolina.

"Everything about this book is correct except the title. Anyone with a taste bud in their mouth should follow these recipes and open their mouth." - Maya Angelou

Stephanie L. Tyson (right) and her partner and co-owner, Vivian Joiner (left), opened Sweet Potatoes in the Downtown Arts District of Winston-Salem in 2004. Both live in Winston-Salem, North Carolina.
Loading...
or support indie stores by buying on