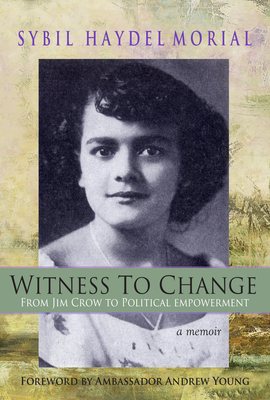 From Jim Crow to Political Empowerment

While exiled from her beloved hometown of New Orleans after Hurricane Katrina, Sybil Haydel Morial began to document her remarkable life. In this memoir, she focuses on the sweeping changes--desegregation, the end of Jim Crow, the fight for voting rights and political empowerment--that transformed the country during her lifetime.

But this is also a personal story, an account of her own evolution as an African-American woman in the midst of tempests. By necessity and choice, Sybil, her late husband, Ernest "Dutch" Morial, and their five children became legal, then political activists. After serving in the Louisiana state legislature as the first African American, her husband became the first black mayor of New Orleans in 1974. In 1994, Sybil's oldest son, Marc, who is now president of the National Urban League, would also begin two terms as mayor.The daughter of a well-respected physician in New Orleans, Sybil grew up in a middle-class, integrated neighborhood in New Orleans during the 1940s and 50s. After graduating from Boston University, where she met fellow student Martin Luther King Jr., Sybil became the first African American to teach in the Newton, Massachusetts, public-school system.

Upon returning to New Orleans, Sybil participated in some of the first tests for integration attempting to enroll at both Tulane and Loyola. In 1962, she was the lone plaintiff in a successful challenge to a statute prohibiting public-school teachers from being involved in any organization advocating civil rights. She also formed the Louisiana League of Good Government to help African-American citizens register to vote. But her memoir is more than a civil rights chronicle. Through her story, we get a rare glimpse into the lives of the middle-class black society during Jim Crow and the battles with discrimination that they faced. We also see the evolution of their sons and daughters as they claimed their positions as leaders of the civil rights struggle and later became leaders of their communities and nation. As Ambassador Andrew Young, a childhood friend and later Sybil's prom date, relates in his foreword: "It is doubtful that New Orleans could have produced two mayors with the dynamic, creative, and visionary leadership of 'Dutch' and Marc without a wife and mother of Sybil's loving strength, intelligence, and moral courage. But the life she lived in the crucible times and her perception of the civil rights movement in New Orleans goes far beyond that."

SYBIL HAYDEL MORIAL is an educator, activist, and community leader in New Orleans, Louisiana. The wife of the first African American mayor of New Orleans, Ernest N. "Dutch" Morial, Sybil spent her career in the education field, first as a public school teacher and later as an administrator at Xavier University in New Orleans.

SYBIL HAYDEL MORIAL is an educator, activist, and community leader in New Orleans, Louisiana. The wife of the first African American mayor of New Orleans, Ernest N. "Dutch" Morial, Sybil spent her career in the education field, first as a public school teacher and later as an administrator at Xavier University in New Orleans.