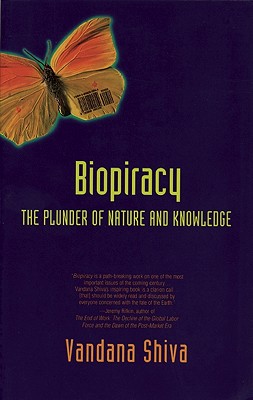 In this intelligently argued and ethically principled book, internationally renowned Third World environmentalist Vandana Shiva exposes the latest frontier of the North's ongoing assault against the South's biological and other resources. Since the land, the forests, the oceans, and the atmosphere have already been colonized, eroded, and polluted, she argues, Northern capital is now carving out new colonies to exploit for gain: the interior spaces of the bodies of women, plants, and animals.

Under agreements such as GATT, she argues, the North claims a need to be "protected" from the South so it can continue its uninterrupted theft of the Third World's genetic diversity. This theft, Shiva shows, has profoundly disturbing consequences for women, the Third World, and the environment.

With specific considerations of gene-patenting, genetic engineering, and biotechnology, Biopiracy is essential reading for anyone concerned with technology, imperialism, feminism or the environment.

A world-renowned environmental leader and recipient of the 1993 Alternative Nobel Peace Prize (the Right Livelihood Award), Shiva has authored several bestselling books, most recently Earth Democracy. Activist and scientist, Shiva leads, with Ralph Nader and Jeremy Rifkin, the International Forum on Globalization. Before becoming an activist, Shiva was one of India's leading physicists.
or
Not Currently Available for Direct Purchase
Copyright © 2020 American Booksellers Association