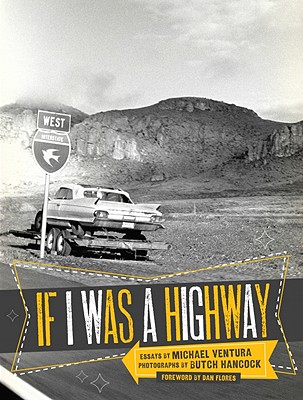 If I Was a Highway (Voice in the American West) (Hardcover)

Michael Ventura's owned only one car his entire life: a green '69 Chevy Malibu. Its wheels have crisscrossed the American landscape over more miles than a round trip to the moon. From Times Square to Terlingua, from Maine to Los Angeles, from Austin to Deadwood, Ventura has chronicled the continent in "a kind of switchback journey in image and thought." His essays convey a tactile and intimate relationship with land and people--and of course the car. Ventura's distinctive voice and vision are familiar to readers of the Austin Chronicle (where many of these pieces first appeared), as well the Austin Sun, Psychotherapy Networker, and LA Weekly. In this collection, its title borrowed from a Butch Hancock song, the essays switch lanes with Hancock's evocative black-and-white photographs. Slowing down to take notice of a makeshift shrine in the Texas Panhandle or zipping along the New York Thruway before dawn, Ventura captures the details that make us think profoundly about work, music, poverty, beauty, our home on the planet and in the universe. About volcanoes and the Very Large Array. About friends and companions. About gods and goddesses and God. With Lubbock, Texas, and the Southwest as the book's home base, If I Was a Highway roams widely and freely as Ventura takes readers on an unforgettable journey not only into the country but into the soul.

Journalist, poet, and novelist Michael Ventura is the author of more than 1,000 articles and eight books, including Letters at 3AM: Reports on Endarkment and Cassavetes Directs. A native of New York City, he has spent most of his writing life on the West Coast and now lives in Lubbock, Texas.Architect, photographer, TV producer, and singer-songwriter Butch Hancock has recorded more than fifteen albums. Born in Lubbock, Texas, he now lives in Terlingua, in Texas s Big Bend region.Writer and professor Dan Flores, author of Caprock Canyonlands: Journeys into the Heart of the Southern Plains, divides his time between the Bitterroot Valley of Montana and the Galisteo River Valley outside Santa Fe, New Mexico."
or
Buy Here
Copyright © 2020 American Booksellers Association