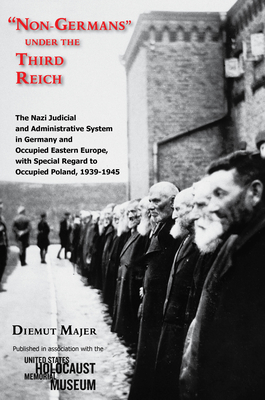 Non-Germans Under the Third Reich

The Nazi Judicial and Administrative System in Germany and Occupied Eastern Europe, with Special Regard to Occupied (Modern Jewish History)

Under the legal and administrative system of Nazi Germany, people categorized as Fremdv lkische (literally, "foreign people") were subject to special laws that restricted their rights, limited their protection under the law, and exposed them to extraordinary legal sanctions and brutal, extralegal police actions. These special laws, one of the central constitutional principles of the Third Reich, applied to anyone perceived as different or racially inferior, whether German citizens or not. "Non-Germans" under the Third Reich traces the establishment and evolution of these laws from the beginnings of the Third Reich through the administration of annexed and occupied eastern territories during the war. Drawing extensively on German archival sources as well as on previously unexplored material from Poland and elsewhere in eastern Europe, the book shows with chilling detail how the National Socialist government maintained a superficial legal continuity with the Weimar Republic while expanding the legal definition of Fremdv lkische, to untimately give itself legal sanction for the actions undertaken in the Holocaust. Replete with revealing quotations from secret decrees, instructions, orders, and reports, this major work of scholarship offers a sobering assessment of the theory and practice of law in Nazi Germany. Published in association with the United States Holocaust Memorial Museum.