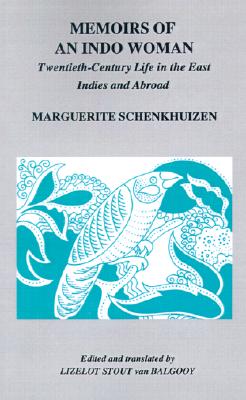 Memoirs of an Indo Woman

The memoirs of Marguérite Schenkhuizen provide an overview of practically the whole of the twentieth century as experienced by persons of mixed Dutch and Indonesian ancestry who lived in the former Dutch East Indies. The memoirs provide vignettes of Indonesian life, both rural and urban, as seen through the eyes of the author first as a girl, then as a wife separated from her husband during the Japanese occupation, finally as an immigrant to the United States after World War II.

This self-portrait gives glimpses of the life of Indos from inside their society, glimpses that are valuable for their descendents as well as for outsiders. Written with humor and a positive town, Schenkhuizen’s story sets aside the myth that Indos were denied access to the upper layers of Dutch colonial society or were otherwise disadvantaged. Instead, her life story provides an authentic view of a vital Indo culture and experience that has been unavailable to the general reader of English.

“This books is most valuable for its minutely detailed record of the everyday life of the Indos of Java in the heyday of the Dutch East Indies. Ms. Schenkhuizen was a keen observer, with what seems a near-photographic memory for scenes and situations…. The book provides plenty of raw material for the study of culture contact and human tensions. Anyone interested in ethnic relations in a colonial hierarchy should read this book.”—E. N. Anderson, Anthropology and Humanism