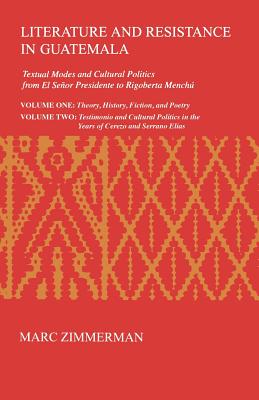 Literature and Resistance in Guatemala

What circumstances lead writers in a poor, multi-ethnic and largely illiterate country to produce a literature that both expresses and affects opposition to the regime? Who are these writers? This study examines these and other questions about the literature of resistance in Guatemala, from the days of Estrada Cabrera up to the events of May and June of 1993.

Zimmerman provides the cultural context for the various modes of literary production and analysis, and identifies the currents of opposition in the nation’s fiction, poetry, and testimonial writing. He details the cultural politics involving Guatemalan writers and their organizations during their years of Cerezo and Serrano-Elías, paying particular attention to the role of women and indigenous groups, Rigoberta Menchú among them.

These two volumes are companion texts to Guatemala: Voices from the Silence, an “epic-collage” of writings compiled by Zimmerman and Raúl Rojas.

Marc Zimmerman is an associate professor of Latin American Studies at the University of Illinois at Chicago. He has published widely on Latin American subjects, and is the author of the companion to this volume, Literature and Resistance in Guatemala (Ohio, 1995).