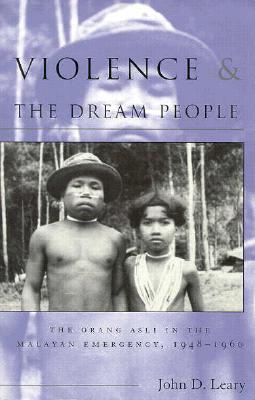 Violence and the Dream People, 95

Violence and the Dream People is an account of a little-known struggle by the Malayan government and the communist guerrillas, during the 1948-1960 Malayan Emergency, to win the allegiance of the Orang Asli, the indigenous people of the peninsular Malaya. The author argues that the use of force by both sides in their attempts to woo or coerce the jungle dwellers to support one side or the other in the conflict, caused tensions among the Orang Asli that resulted in counter violence against the interlopers and internecine killings in the tribal groups.

This study challenges the depiction of the Orang Asli as na ve innocents, unwittingly manipulated by outsiders for their own purposes. Heavily outnumbered, they looked to their own resources to survive, in the face of relocation, conscription, random bombings, and haphazard killing. Leary argues that they were shrewd enough to recognize the winning side and backed their judgment with force where necessary.

Violence and the Dream People is an important study of a much neglected facet of the Malayan Emergency and of the history of the indigenous peoples of the Malay Peninsula.