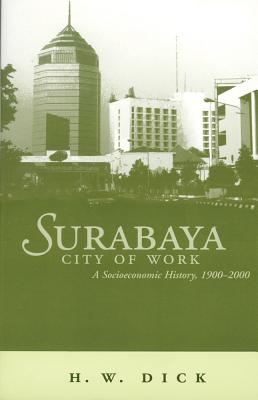 Surabaya is Indonesia’s second largest city but is not well known to the outside world. Yet in 1900, Surabaya was a bigger city than Jakarta and one of the main commercial centers of Asia. Collapse of sugar exports during the 1930s depression, followed by the Japanese occupation, revolution, and independence, brought on a long period of stagnation and retreat from the international economy. Not until the export boom of the 1990s did Surabaya regain prominence as Southeast Asia’s leading non–capital–city industrial area.

Previous thinking on Indonesia is being reassessed in light of recent political and economic upheaval. Surabaya, City of Work offers an alternative to the Jakarta-centric focus of most writing on the country. It is a multifaceted view of a fascinating and complex city in the dimensions of time and space, economy and society, and the current transition toward decentralization makes it highly topical.

Exploration of this eventful economic history gives new insight into Indonesia’s modern economic development. Industrialization is recognized as being associated with rapid urbanization, but this is the first study of Indonesia from an explicitly urban perspective. Surabaya, City of Work takes a broad approach that links industrialization to socioeconomic trends, the increasing role of government, changing land use, and trade patterns.

This well–illustrated local history encompassing national events and trends will be a central work on Indonesia for years to come.

“The ease with which to book can be read conceals the fact that Dick has had to painstakingly piece the account together from a large number of disparate sources, including Dutch archival materials.… Dick proves that resourceful use of snippets of information can go a very long way.”—Australian Economic History

“With its explicit emphasis on long–term trends and the socio–political context, it is a readable book for the general student of Indonesia or urban history. At the same time, the richness of the data presented, and the sophistication of his judgment, make it a rewarding source for the specialist.”—Heather Sutherland, Vrije Universiteit Amsterdam, EH.NET

Howard Dick is an economic historian, Southeast Asia specialist, and associate professor at the Australian Centre of International Business, University of Melbourne, Australia. He has written widely on Indonesia.