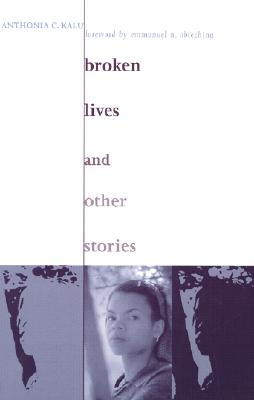 Broken Lives and Other Stories

In her startling collection of short stories, Broken Lives and Other Stories, Anthonia C. Kalu creates a series of memorable characters who struggle to hold displaced but dynamic communities together in a country that is at war with itself.

Broken Lives and Other Stories presents a portrait of the ordinary women, children, and men whose lives have been battered by war in their homeland. Written in response to the Nigerian Civil War, known on the Igbo side as Ogu Biafra—the Biafran War—this collection focuses on the everyday conditions of the local people and how their personal situations became entangled in national crises. The stories capture a diversity of issues, from the implications of self-rule and the presence of soldiers among civilians, to masquerades, air raids, and rape.

Through her riveting narratives, Kalu draws the reader into the depths of some of Africa’s most troubling issues, such as the concern for safety during the frequent outbreaks of hostilities, which can range from civil unrest to armed combat. How do young people, women, and the elderly cope during those crises? Are the struggles for national political power greater than the everyday struggle for decent living by the person on the street?

While conveying the vitality and joy of Africa's women and youth, Broken Lives and Other Stories also examines the impact of the brain drain caused by wars and instability within the continent itself. Both the war against women and women’s constant war to survive in contemporary Africa are brought into sharp focus throughout these stories.

For readers interested in the last thirty-five years of unrest across Africa, this collection is essential reading.

“Storytelling at its best, full of subtlety and a nuanced exploration of the core issues of the Biafran tragedy.”—Emmanuel Obiechina, Visiting Lecturer of Afro-American Studies, Harvard University

A professor of black studies at the University of Northern Colorado, Greeley, Anthonia C. Kalu is the author of Women, Literature, and Development in Africa. She has also published in Research in African Literature, Africa Today, Literary Griot, and African Studies Review.