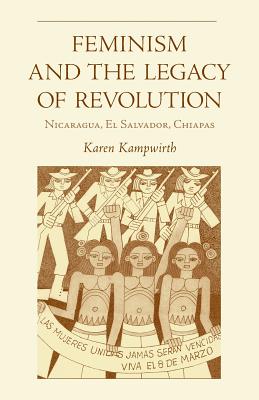 Feminism and the Legacy Of Revolution

In many Latin American countries, guerrilla struggle and feminism have been linked in surprising ways. Women were mobilized by the thousands to promote revolutionary agendas that had little to do with increasing gender equality. They ended up creating a uniquely Latin American version of feminism that combined revolutionary goals of economic equality and social justice with typically feminist aims of equality, nonviolence, and reproductive rights.Drawing on more than two hundred interviews with women in Nicaragua, El Salvador, and the Mexican state of Chiapas, Karen Kampwirth tells the story of how the guerrilla wars led to the rise of feminism, why certain women became feminists, and what sorts of feminist movements they built. Feminism and the Legacy of Revolution: Nicaragua, El Salvador, Chiapas explores how the violent politics of guerrilla struggle could be related to the peaceful politics of feminism. It considers the gains, losses, and internal conflicts within revolutionary women’s organizations. Feminism and the Legacy of Revolution challenges old assumptions regarding revolutionary movements and the legacy of those movements for the politics of daily life. It will appeal to a broad, interdisciplinary audience in political science, sociology, anthropology, women’s studies, and Latin American studies as well as to general readers with an interest in international feminism.

Karen Kampwirth is an associate professor of political science and chair of the Latin American studies program at Knox College, Galesburg, Illinois. She is the author of Women and Guerrilla Movements: Nicaragua, El Salvador, Chiapas, Cuba and coeditor, with Victoria Gonzalez, of Radical Women in Latin America: Left and Right. Her current research is on international organizing against feminism.
Loading...
or support indie stores by buying on