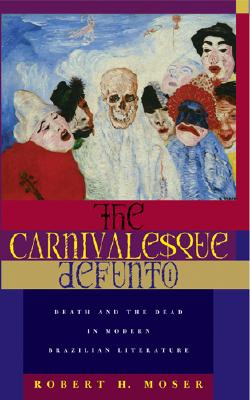 The Carnivalesque Defunto explores the representations of death and the dead in Brazil’s collective and literary imagination. The recurring stereotype of Brazil as the land of samba, soccer, and sandy beaches overlooks a more complex cultural heritage in which, since colonial times, a relationship of proximity and reciprocity has been cultivated between the living and the dead.

Robert H. Moser details the emergence of a prominent motif in modern Brazilian literature, namely the carnivalesque defunto (the dead) that, in the form of a protagonist or narrator, returns to beseech, instruct, chastise, or even seduce the living. Drawing upon the works of esteemed Brazilian writers such as Machado de Assis, Érico Veríssimo, and Jorge Amado, Moser demonstrates how the defunto, through its mocking laughter and Dionysian resurrection, simultaneously subverts and inverts the status quo, thereby exposing underlying points of tension within Brazilian social and political history.

Incorporating elements of both a celestial advocate and an untrustworthy specter, the defunto also serves as a metaphor for one of modern Brazil’s greatest dilemmas: reconciling the past with the present.

The Carnivalesque Defunto offers a comparative framework by juxtaposing the Brazilian literary ghost with other Latin American, Caribbean, and North American examples. It also presents a cross-disciplinary approach toward understanding the complex relationship forged between Brazil’s spiritual traditions and literary expressions.

“In unearthing Brazil’s complex relationship with its past, some defuntos bring reconciliation and renewal to their communities; other do not. Either way, the otherworldly figures offer persistent critiques from the perspective of a not-so-dead past.”
— Choice

Robert H. Moser is an assistant professor of Portuguese and Brazilian studies at the University of Georgia. His publications include articles, book chapters, and reviews in the areas of Portuguese, Brazilian, and Lusophone African literature and culture. He is the coeditor of the forthcoming Anthology of Luso-American Literature.
Loading...
or
Not Currently Available for Direct Purchase