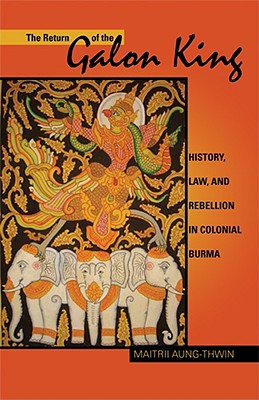 The Return of the Galon King

In late 1930, on a secluded mountain overlooking the rural paddy fields of British Burma, a peasant leader named Saya San crowned himself King and inaugurated a series of uprisings that would later erupt into one of the largest anti-colonial rebellions in Southeast Asian history. Considered an imposter by the British, a hero by nationalists, and a prophet-king by area-studies specialists, Saya San came to embody traditional Southeast Asia’s encounter with European colonialism in his attempt to resurrect the lost throne of Burma.

The Return of the Galon King analyzes the legal origins of the Saya San story and reconsiders the facts upon which the basic narrative and interpretations of the rebellion are based. Aung-Thwin reveals how counter-insurgency law produced and criminalized Burmese culture, contributing to the way peasant resistance was recorded in the archives and understood by Southeast Asian scholars.

This interdisciplinary study reveals how colonial anthropologists, lawyers, and scholar-administrators produced interpretations of Burmese culture that influenced contemporary notions of Southeast Asian resistance and protest. It provides a fascinating case study of how history is treated by the law, how history emerges in legal decisions, and how the authority of the past is used to validate legal findings.

Praise For The Return of the Galon King: History, Law, and Rebellion in Colonial Burma (Ohio RIS Southeast Asia Series #124)…

“Return of the Galon King is a brilliant example of listening to one's sources, rather than talking past them. By trying to understand what the Rebellion Tribunal was actually about, not what we want it to be about, Aung-Thwin has created an indispensable work out of an indispensable historical episode.”—Journal of Southeast Asian Studies

“The Return of the Galon King is a valuable addition not just to the study of Burma, but also the study of Southeast Asian history as a whole.”—Journal of the Economic and Social History of the Orient

“Maitrii Aung-Thwin’s latest study of the Saya San Rebellion is a powerful critique of the existing historiography on the subject…. It represents an important contribution to the study of colonial Burma, particularly by introducing eleme

“In a meticulous re-examination of the evidence, (Aung-Thwin) argues convincingly that the narrative of the rebellion was constructed by the colonial authorities from already existing colonial interpretations and reports of Burmese attitudes and pea

“An important contribution to Myanmar studies, historiography, and social science methodology.”—Robert H. Taylor, author of The State in Burma and Burma: Political Economy under Military Rule

Maitrii Aung-Thwin is an assistant professor of Southeast Asian History at the National University of Singapore.