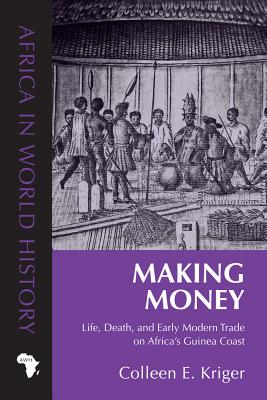 A new era in world history began when Atlantic maritime trade among Africa, Asia, Europe, and the Americas opened up in the fifteenth century, setting the stage for massive economic and cultural change. In Making Money, Colleen Kriger examines the influence of the global trade on the Upper Guinea Coast two hundred years later—a place and time whose study, in her hands, imparts profound insights into Anglo-African commerce and its wider milieu.

A stunning variety of people lived in this coastal society, struggling to work together across deep cultural divides and in the process creating a dynamic creole culture. Kriger digs further than any previous historian of Africa into the records of England’s Royal African Company to illuminate global trade patterns, the interconnectedness of Asian, African, and European markets, and—most remarkably—the individual lives that give Making Money its human scale.

By inviting readers into the day-to-day workings of early modern trade in the Atlantic basin, Kriger masterfully reveals the rich social relations at its core. Ultimately, this accessible book affirms Africa’s crucial place in world history during a transitional period, the early modern era.

“Kriger shows how West African traders, producers, and workers in countless urban occupations contributed to a vast commercial system that moved goods and people across oceans and continents. Her narrative centers on African people, mainly in African settings, and draws connective lines from there outward to the Middle East, Europe, Asia, and the Americas. While not diminishing the importance of slavery and slave trading to West Africa’s economy, Kriger illuminates crucial lesser-known aspects of the commodities central to it and the multicultural milieus in which traders operated. By focusing on the African economy more broadly, Making Money neatly explains what those teaching the history of Atlantic Africa are rarely able to convey and what students often fail to understand: Africans' reasons for participating in the slave trade.”—Rebecca Shumway, The William and Mary Quarterly

“Kriger’s archival excavations uncover a wealth of previously untapped detail which present the lives and engagement of Atlantic African individuals from Guinea in an entirely new light.…By humanizing too the political actors, traders, and captives produced by the Atlantic system in Africa, Kriger brings the current fashion in Atlantic studies for microhistories to bear on the Guinea region for an earlier period than usual. There’s no doubt that this book should be a standard feature on course curricula for many years to come.”—Toby Green, African Studies Review

“In this wonderfully researched book, Colleen Kriger anchors the coastal activity of the Europeans in the African cultures they met, making them only one set of many actors in a society that had to marry widely different economic cultures into a workable system. This book will open a new chapter and discussion about the nature of African relationships with Europeans.”—John K. Thornton, author of A Cultural History of the Atlantic World, 1250–1820

“Colleen Kriger’s new study … deserves attention for its innovative reading of British archival sources and its rich array of evidence.… One value of this study for non-specialists lies in the ways Kriger picks apart simplistic notions of barter economies by noting the shifting value and composition of bundles of goods.… Still another innovation is the attention to how coastal African women tried and often succeeded in protecting their economic interests.”—Jeremy Rich, Canadian Journal of History

“Extending a tradition of scholarship dating to Walter Rodney, Kriger places production and exchange in late-seventeenth-century Upper Guinea in their global context while opening a window on the fascinating local, regional, and personal relationships that supported the activity. Carefully documented and clearly written, Making Money is ready for classroom use.”—Donald R. Wright, author of The World and a Very Small Place in Africa: A History of Globalization in Niumi, The Gambia

Colleen E. Kriger is a professor of history at the University of North Carolina at Greensboro. She has received numerous grants and fellowships in support of her research. Her scholarship focuses on precolonial West and West Central Africa and topics such as social history, artisans, oral history, and material culture.