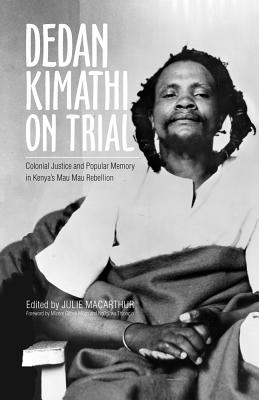 The transcript from this historic trial, long thought destroyed or hidden, unearths a piece of the British colonial archive at a critical point in the Mau Mau Rebellion. Its discovery and landmark publication unsettles an already contentious Kenyan history and its reverberations in the postcolonial present.

Perhaps no figure embodied the ambiguities, colonial fears, and collective imaginations of Kenya’s decolonization era more than Dedan Kimathi, the self-proclaimed field marshal of the rebel forces that took to the forests to fight colonial rule in the 1950s. Kimathi personified many of the contradictions that the Mau Mau Rebellion represented: rebel statesman, literate peasant, modern traditionalist. His capture and trial in 1956, and subsequent execution, for many marked the end of the rebellion and turned Kimathi into a patriotic martyr.

Here, the entire trial transcript is available for the first time. This critical edition also includes provocative contributions from leading Mau Mau scholars reflecting on the meaning of the rich documents offered here and the figure of Kimathi in a much wider field of historical and contemporary concerns. These include the nature of colonial justice; the moral arguments over rebellion, nationalism, and the end of empire; and the complexities of memory and memorialization in contemporary Kenya.

“Had Julie MacArthur produced a volume containing simply the text of Kimathi’s trial that achievement alone would have been worthy of high praise. To bring together the additional documents presented here – and garner the participation and resultant scholarship of these contributors – is an extraordinary accomplishment. Faculty might assign Dedan Kimathi on Trial in the undergraduate classroom, but perhaps most importantly, it will be read and fiercely argued over in Kenya.”—Canadian Journal of African Studies

“[This] publication accords Kenya and the world yet another moment of serious reflection and stock taking in revisiting one of Africa’s most compelling moments in the history of resistance against colonialist and imperialist injustice.”—From the foreword by Mĩcere Gĩthae Mũgo and Ngũgĩ wa Thiong’o

“The scholarly reflections brought together in this volume reveal the deep historical significance of figures like Kimathi, the moral lessons we can learn from the past, and the continuing relevance of the struggle for independence in Kenya today.”—From the introductory note by Chief Justice Willy Mutunga

“With the proceedings and exhibits of Kimathi’s show trial produced in gripping detail, and essays showing why this trial mattered far beyond a Nyeri courtroom in 1956, MacArthur superbly situates Kimathi’s fate amidst African resistance to crumbling empire.”—Huw Bennett, author of Fighting the Mau Mau: The British Army and Counter-Insurgency in the Kenya Emergency