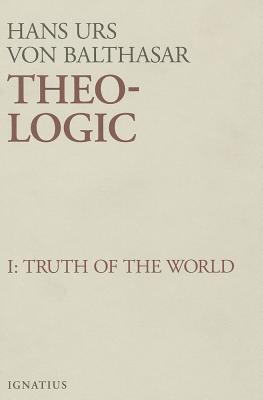 Theo-Logic is the third and crowning part of the great trilogy of the masterwork of theologian Hans Urs von Balthasar, following his first two parts, The Glory of the Lord and Theo-Drama. This is the third volume of Theo-Logic.

Theo-Logic is a variation of theology, it being about not so much what man says about God, but what God speaks about himself. Balthasar does not address the truth about God until he first reflects on the beauty of God (The Glory of the Lord). Then he follows with his reflections on the great drama of our salvation and the goodness and mercy of the God who saves us (Theo-Drama). Now, in this work, he is ready to reflect on the truth that God reveals about himself, which is not something abstract or theoretical, but rather the concrete and mysterious richness of God's being as a personal and loving God.

Hans Urs von Balthasar (1905–1988) was a Swiss theologian widely regarded as one of the greatest theologians and spiritual writers of modern times. Named a cardinal by Pope John Paul II, he died shortly before being formally inducted into the College of Cardinals. He wrote over one hundred books, including Prayer, Heart of the World, Mary for Today, Love Alone Is Credible, Mysterium Paschale and his major multi-volume theological works: The Glory of the Lord, Theo-Drama and Theo-Logic.