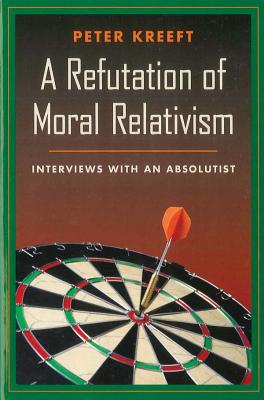 A Refutation of Moral Relativism

Interviews With an Absolutist

No issue is more fateful for civilization than moral relativism. History knows not one example of a successful society which repudiated moral absolutes. Yet most attacks on relativism have been either pragmatic (looking at its social consequences) or exhorting (preaching rather than proving), and philosophers' arguments against it have been specialized, technical, and scholarly.

In his typical unique writing style, Peter Kreeft lets an attractive, honest, and funny relativist interview a "Muslim fundamentalist" absolutist so as not to stack the dice personally for absolutism. In an engaging series of personal interviews, every conceivable argument the "sassy Black feminist" reporter Libby gives against absolutism is simply and clearly refuted, and none of the many arguments for moral absolutism is refuted.

Peter Kreeft, Ph.D., Professor of Philosophy at Boston College, is one of the most respected Christian authors of our time. His many bestselling books cover a vast array of topics in spirituality, theology, and philosophy. They include How to Be Holy, Practical Theology, Back to Virtue, Because God Is Real, You Can Understand the Bible, Angels and Demons, Heaven: The Heart's Deepest Longing, and A Summa of the Summa.