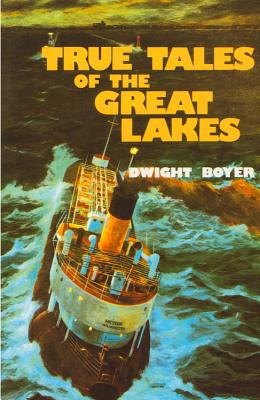 True Tales of the Great Lakes

Here is another of Dwight Boyer's books on the world's largest inland seas. His painstaking research has uncovered many long-forgotten adventures and tragedies of freshwater ships and sailors. He offers new material on the dramatic events that took place on each of the lakes during the terrible storm of 1913, a four-day weather convulsion in which twelve ships and their crews vanished forever, and approximately 300 sailors perished. Here too is the tragic story and the bitter aftermath of the capsizing of the excursion steamer Eastland, which sank in the Chicago River in 1915 with a loss of 835 lives. In a lighter vein there is the tragicomedy involving the City of Dresden, which had to jettison 500 kegs and 1,000 cases of whiskey to the delight of the farmers of Long Point on Lake Erie.This memorable collection contains many more authentic stories of ships, people and happenings. They run the gamut from sacrifice and superb bravery to carelessness, poor judgement, wanton disregard for human life, and often just plain bad luck.

Dwight Boyer (November 18, 1912 in Elyria, Ohio – October 15, 1978 in Willoughby, Ohio) was a reporter and marine historian of the Great Lakes. He wrote for The Blade (Toledo, Ohio) from 1944-1954, and for The Plain Dealer (Cleveland, Ohio) from 1954-1978.Boyer specialized in feature-length narratives of life aboard Great Lakes lake freighters, often concentrating on stories of mystery and disaster. He had many friends in the shipping trade and among the newsgatherers of the Great Lakes ports, and carefully weighed the information they gave him. He excelled in constructing a conjectural trajectory for the cargo vessels that disappeared in the great storms of the past, never being seen in again in their home port or any other harbor of refuge.Boyer discussed the 1882 foundering of the SS Asia, the 1927 disappearance of the SS Kamloops, and the 1929 foundering of the SS Milwaukee, in Ghost Ships of the Great Lakes (1968), and retold an account of the 1975 disappearance of the SS Edmund Fitzgerald in his last book, Ships and Men of the Great Lakes (1977).
Loading...
or
Not Currently Available for Direct Purchase