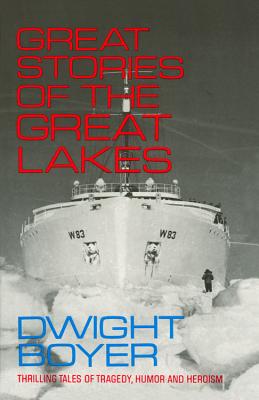 The first commercial ship to sail the Great Lakes promptly vanished on its maiden voyage, a prophetic beginning to the grim and tragic history of navigation on the world's greatest fresh-water seas. The ribs and plates of thousands of vessels - the immigrant ships, brigs, schooners, steel freighters, and even big salt-water tramp ships, built to go anywhere in the world - today lie fathoms deep, victims of fierce storms, collisions, fires, shoals, and the myriad hazards of navigation. Here, too, are the ghosts of the men who sailed them, tramping the decks of lost ships. It is typical of the sailor's lot, too, that while they died as heroically as their brethren on salt water, many of them perished unknown and unheralded.Written by a newspaperman who had spent years collecting and documenting the history of lakeships and the men who sail them, Great Stories of the Great Lakes brings to light the heroism, tragedy, and humor, largely overlooked by history, that was and is part and parcel of the evolution of the great inland oceans. These are true stories of the ships and men who played their parts in eras when the fresh-water ships were growing from tiny brigantines to the huge vessels of today, some of them among the largest in the American and Canadian merchant fleets. These stories make for fascinating, exciting reading.

Dwight Boyer (November 18, 1912 in Elyria, Ohio – October 15, 1978 in Willoughby, Ohio) was a reporter and marine historian of the Great Lakes. He wrote for The Blade (Toledo, Ohio) from 1944-1954, and for The Plain Dealer (Cleveland, Ohio) from 1954-1978.Boyer specialized in feature-length narratives of life aboard Great Lakes lake freighters, often concentrating on stories of mystery and disaster. He had many friends in the shipping trade and among the newsgatherers of the Great Lakes ports, and carefully weighed the information they gave him. He excelled in constructing a conjectural trajectory for the cargo vessels that disappeared in the great storms of the past, never being seen in again in their home port or any other harbor of refuge.Boyer discussed the 1882 foundering of the SS Asia, the 1927 disappearance of the SS Kamloops, and the 1929 foundering of the SS Milwaukee, in Ghost Ships of the Great Lakes (1968), and retold an account of the 1975 disappearance of the SS Edmund Fitzgerald in his last book, Ships and Men of the Great Lakes (1977).
or support indie stores by buying on
Copyright © 2020 American Booksellers Association