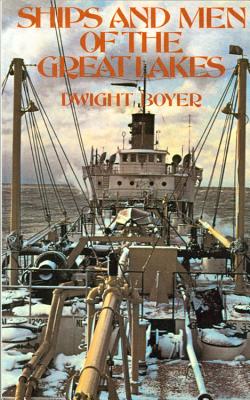 Ships and Men of the Great Lakes

Ships and men of the Great Lakes spans more than a century of Great Lakes history in a series of true, thoroughly documented dramas, most of them describing the misadventures of vessels and the men who sailed them.What ever happened to the sturdy old SOO CITY—what caused her to vanish with all hands? There was no mystery, however, about why the Daniel J. Morrell went down one stormy night in November 1966, although the survival of crewman Dennis Hale and his graphic account of his encounter with a ghostly stranger on the life raft is another matter.Stories of dreadful tragedy and unbridled stupidity are intermingled with unsurpassed acts of heroism such as recounted in the ill-fated voyage of the passenger steamer Erie. One August 9, 1841, the Erie left her dock at Buffalo, New York bound for Chicago with stops in Erie, Cleveland, and Detroit with over three hundred passengers aboard. She never made it!The W.W. Arnold was smashed to pieces on Lake Superior in 1869, when aids to navigation were practically nonexistent. Yet, 106 years later, in 1975, the gigantic ore carrier, Edmund Fitzgerald, loaded with state-of-the-art navigational equipment, also disappeared, with all hands, in Lake Superior. Years after the fact, the circumstances leading to their demise are still subject to speculation, suspicion, and heated debate.

Dwight Boyer (November 18, 1912 in Elyria, Ohio – October 15, 1978 in Willoughby, Ohio) was a reporter and marine historian of the Great Lakes. He wrote for The Blade (Toledo, Ohio) from 1944-1954, and for The Plain Dealer (Cleveland, Ohio) from 1954-1978.Boyer specialized in feature-length narratives of life aboard Great Lakes lake freighters, often concentrating on stories of mystery and disaster. He had many friends in the shipping trade and among the newsgatherers of the Great Lakes ports, and carefully weighed the information they gave him. He excelled in constructing a conjectural trajectory for the cargo vessels that disappeared in the great storms of the past, never being seen in again in their home port or any other harbor of refuge.Boyer discussed the 1882 foundering of the SS Asia, the 1927 disappearance of the SS Kamloops, and the 1929 foundering of the SS Milwaukee, in Ghost Ships of the Great Lakes (1968), and retold an account of the 1975 disappearance of the SS Edmund Fitzgerald in his last book, Ships and Men of the Great Lakes (1977).
Loading...
or support indie stores by buying on