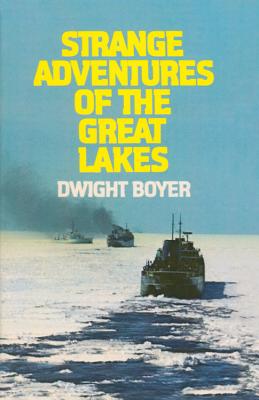 Relates twelve true adventures of ships and their crews on the Great Lakes.

Dwight Boyer (November 18, 1912 in Elyria, Ohio – October 15, 1978 in Willoughby, Ohio) was a reporter and marine historian of the Great Lakes. He wrote for The Blade (Toledo, Ohio) from 1944-1954, and for The Plain Dealer (Cleveland, Ohio) from 1954-1978.Boyer specialized in feature-length narratives of life aboard Great Lakes lake freighters, often concentrating on stories of mystery and disaster. He had many friends in the shipping trade and among the newsgatherers of the Great Lakes ports, and carefully weighed the information they gave him. He excelled in constructing a conjectural trajectory for the cargo vessels that disappeared in the great storms of the past, never being seen in again in their home port or any other harbor of refuge.Boyer discussed the 1882 foundering of the SS Asia, the 1927 disappearance of the SS Kamloops, and the 1929 foundering of the SS Milwaukee, in Ghost Ships of the Great Lakes (1968), and retold an account of the 1975 disappearance of the SS Edmund Fitzgerald in his last book, Ships and Men of the Great Lakes (1977).
or support indie stores by buying on
Copyright © 2020 American Booksellers Association