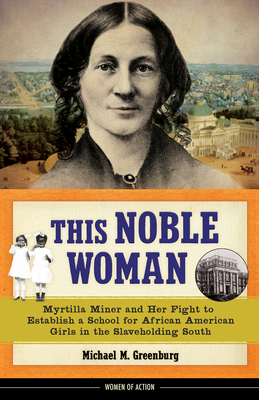 Frederick Douglass dismissed Myrtilla’s plan to open a school for African American girls in the slaveholding South as “reckless, almost to the point of madness.” But Myrtilla Miner, the daughter of poor white farmers in Madison County, New York, was relentless. Fueled by an unyielding feminist conviction, and against a tide of hostility, on December 3, 1851, the fiery educator and abolitionist opened the School for Colored Girls—the only school in Washington, DC, dedicated to training African American students to be teachers.
Although often in poor health, Myrtilla was a fierce advocate for her school, fending off numerous attacks, including stonings, arson, and physical threats, and discouraging local “rowdies” by brandishing her revolver with open displays of target practice. The school would gradually gain national fame and stimulate a nationwide debate on the education of black people. Myrtilla’s School for Colored Girls would slowly flourish through the years, and its mission exists even today through the University of the District of Columbia. This Noble Woman is the first modern biography of Myrtilla Miner for young adults, and includes historic photos, source notes, a bibliography, and a list of resources for further exploration.

Praise For This Noble Woman: Myrtilla Miner and Her Fight to Establish a School for African American Girls in the Slaveholding South (Women of Action)…

"Miner's personality, experiences, and historical context are woven together to create a vivid picture of a remarkable and little-known woman's achievements." —Kirkus Reviews

"Bolstered by small black-and-white photos, this is a detailed look at a flawed but notable woman." —Booklist

“Gripping and bizarre . . . In a clear, engaging style, Greenburg marshals the complex facts of the decades-long saga.” —Kirkus Reviews on The Mad Bomber of New York

Michael Greenburg, a practicing attorney and former editor of the Pepperdine Law Review, is the author of Peaches and Daddy, The Mad Bomber of New York, and The Court-Martial of Paul Revere.
Loading...
or support indie stores by buying on