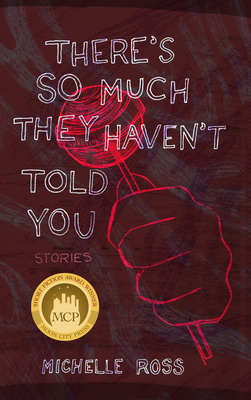 There's So Much They Haven't Told You

Michelle Ross’s debut short-story collection serves as an encyclopedia of modern relationships, taking special interest in those formed on unequal footing, pitting daughters against mothers, wives against husbands, friends against friends. Legacy looms large, as behaviors are passed from one generation to the next, and those entrusted with caring for the young or keeping others employed are found derelict in their duties. Weaknesses are exploited, ignorance is exposed, and bonds are occasionally dissolved. Regarding the human condition as it is portrayed throughout this collection, one character’s words echo prophetically: “You’re at the complete mercy of giants who don’t understand you.”

In spite of all this, Ross’s stories are ultimately tales of striving: to understand, to connect, to reclaim. Themes of discovery are woven tightly, as these individuals, rather than remain in the dark, are regularly drawn to the light that is missing from their lives. Optimism may not abound, but neither do these characters wallow. Time and time again, they evolve into agents of change within their own lives, even if they sometimes choose not to act.

In the end, such thematic depth gives rise to an astoundingly diverse array of voices, styles, and structures. No two entries in Ross’s collection are alike, and collectively they reveal the potential of the American short story, leaving little unsaid.


Praise For There's So Much They Haven't Told You: Short Stories…

“In There’s So Much They Haven’t Told You, Michelle Ross balances the orderliness of the universe with the chaos of the natural world. Here, lessons on particles and black holes and light serve as a disguise for the collection’s greater lessons on what it means to be human. Over the course of twenty-three haunting stories, families face unfathomable violence, couples are brought together and quietly torn apart, and children learn, at last, to see their parents for who they really are. With a fearlessness and creepiness that put me in mind of the fiction of A.M. Homes, these stories astonish.”

—David James Poissant, author of The Heaven of Animals

“These stories bristle with hard-eyed awareness and cut to the bone. With imagery from horror movies, fairy tales, and aquariums, Ross evokes the comfort and squalor of family love.”

Michelle Ross’s fiction has appeared in The Adroit Journal, The Common, Gulf Coast, Necessary Fiction, SmokeLong Quarterly, and Moon City Review. She has an MFA from Indiana University. Originally from Texas, she now lives in Tucson, Arizona, with her husband and son. She serves as fiction editor for Atticus Review.
Loading...
or
Not Currently Available for Direct Purchase