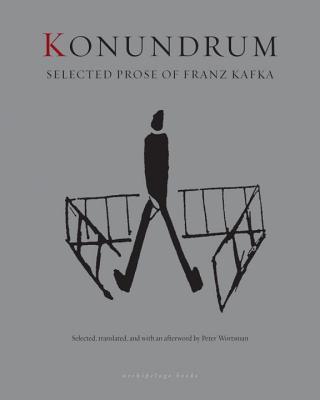 In this new selection and translation, Peter Wortsman mines Franz Kafka's entire opus of short prose--including works published in the author's brief lifetime, posthumously published stories, journals, and letters--for narratives that sound the imaginative depths of the great German-Jewish scribe from Prague. It is the first volume in English to consider his deeply strange, resonantly humane letters and journal entries alongside his classic short fiction and lyrical vignettes "Transformed" is a vivid retranslation of one of Kafka's signature stories, "Die Verwandlung," commonly rendered in English as "The Metamorphosis." Composed of short, black comic parables, fables, fairy tales, and reflections, Konundrums also includes classic stories like "In the Penal Colony," Kafka's prescient foreshadowing of the nightmare of the Twentieth Century, refreshing the writer's mythic storytelling powers for a new generation of readers.

• Words are Miserable Miners of Meaning
• Letter to Ernst Rowohlt
• Reflections
• Concerning Parables
• Children on the Country Road
• The Spinning Top
• The Street-Side Window
• At Night
• Unhappiness
• Clothes Make the Man
• On the Inability to Write
• From Somewhere in the Middle
• I Can Also Laugh
• The Need to Be Alone
• So I Sat at My Stately Desk
• A Writer's Quandary
• Give it Up!
• Eleven Sons
• Paris Outing
• The Bridge
• The Trees
• The Truth About Sancho Pansa
• The Silence of the Sirens
• Prometheus
• Poseidon
• The Municipal Coat of Arms
• A Message from the Emperor
• The Next Village Over
• First Sorrow
• The Hunger Artist
• Josephine, Our Meistersinger, or the Music of Mice
• Investigations of a Dog
• A Report to an Academy
• A Hybrid
• Transformed
• In the Penal Colony
• From The Burrow
• Selected Aphorisms
• Selected Last Conversation Shreds
• In the Caves of the Unconscious: K is for Kafka (An Afterword)
• The Back of Words (A Post Script)

Franz Kafka was a German-language author from Prague who wrote novels and short stories. Many of his works (such as The Trial and The Castle) involve surreal encounters with mysterious bureaucracies. He is widely regarded as one of the most influential writers of the twentieth century.

ABOUT THE TRANSLATOR: Peter Wortsman was a Fulbright Fellow in 1973, a Thomas J. Watson Foundation Fellow in 1974, and a Holtzbrinck Fellow at the American Academy in Berlin in 2010. He received the 1985 Beard's Fund Short Story Award, the 2008 Gertje Potash-Suhr Prosapreis of the Society for Contemporary American Literature in German, and the 2012 Gold Grand Prize for Best Travel Story of the Year in the Solas Awards Competition. He is the author of a book of short fiction, A Modern Way to Die: Small Stories and Microtales (1991), the plays The Tattooed Man Tells All (2000), and Burning Words (2006), and the travelogue/memoir Ghost Dance in Berlin: A Rhapsody in Gray, from Travelers' Tales/Solas House. Wortsman's numerous translations from the German include Telegrams of the Soul: Selected Prose of Peter Altenberg, Travel Pictures by Heinrich Heine, Posthumous Papers of a Living Author by Robert Musil, Peter Schelmiel, The Man Who Sold His Shadow by Adelbert von Chamisso, Selected Prose of Heinrich von Kleist and most recently, Tales of the German Imagination: From The Brothers Grimm to Ingeborg Bachmann, an anthology he assembled, from Penguin Classics. He works as a medical and travel journalist.

"Even a year after the centennial celebration of Franz Kafka’s signature novella Die Verwandlung, commonly known as The Metamorphosis, Peter Wortsman’s latest English translation—which he simply titles “Transformed,” feels downright fresh. Konundrum: Selected Prose of Franz Kafka promises to lure a new generation of casual readers, if not jaded scholars—for its streamlined, playful prose (which still manages to stay faithful to Kafka’s German syntax), as well as its contemporary concerns and sensibilities... Konundrum’s prescient vision of identity mediated, controlled, and distorted via the gaze of popular trend and opinion makes it relevant, if not required, reading." — Brooklyn Rail

"Based on this collection, I’d like to see more of Wortsman’s work . . . Kafka is the vegemite of high-brow literature. You either hate it, love it, or hate it and then realise you love it. Konundrum is an excellent starting place to try his stuff out." — Peter Kelly, Super Novel

"The translation is superb and it seems as though Kafka himself has written in English. This is a book you can dip into, read a couple of stories at a time. But be warned – it is addictive. It is also not conducive to a good night’s sleep – too many weird and wonderful fancies start to rattle around in your brain. Konundrum is a real literary treat and will hopefully bring the exquisite prose of Kafka the acclaim in the English speaking world that it fully deserves." — Rosemary Standeven, Waterstones

"[Kafka] spoke for millions in their new unease; a century after his birth, he seems the last holy writer, and the supreme fabulist of modern man's cosmic predicament." --John Updike

"Kafka's survey of the insectile situation of young Jews in inner Bohemia can hardly be improved upon: 'With their posterior legs they were still glued to their father's Jewishness and with their wavering anterior legs they found no new ground.' There is a sense in which Kafka's Jewish question ('What have I in common with Jews?') has become everybody's question, Jewish alienation the template for all our doubts. What is Muslimness? What is femaleness? What is Polishness? These days we all find our anterior legs flailing before us. We're all insects, all Ungeziefer, now." --Zadie Smith

"The distinction Kafka, or his heroes, draw between this world and the world does not imply that there are two different worlds, only that our habitual conceptions of reality are not the true conception." --W. H. Auden

"Kafka engaged in no technical experiments whatsoever; without in any way changing the German language, he stripped it of its involved constructions until it became clear and simple, like everyday speech purified of slang and negligence. The common experience of Kafka's readers is one of general and vague fascination, even in stories they fail to understand, a precise recollection of strange and seemingly absurd images and descriptions--until one day the hidden meaning reveals itself to them with the sudden evidence of a truth simple and incontestable." --Hannah Arendt

"Kafka's 'stark narratives and furtive fragments' - a series of alerts and premonitions from the unconscious of a genius - are powerfully resonant today." - Jane Ciabattari, BBC Culture

"Kafka's writing is so effective because it plays within an area of overlap between the two worlds. The result, of course, is the Kafkaesque, a mode that is entirely unto itself." - Nicole Rudick, The Paris Review

"Wortsman, who is both a fiction writer, and a translator, changed the way I think about Kafka... Could we call him pre-cognitive of both the 20 and 21st centuries?  In this translation, he's a man for any time." — Susan Weinstein, notanotherbookreview (blog)


"Old favorites such as 'The Metamorphosis,' translated in this collection by Wortsman as 'Transformed' appear in the volume with fresh, updated language for a 21st century audience... Three additional works of short prose that particularly attracted my attention... all showcase  Kafka's ability to take elements of the fantastic and put a realistic and even humorous spin on them." — The Book Binder's Daughter (blog)

"I was struck by the variety in the fiction in this collection and orginality of thought and treatment. Who would think to write a piece where a bridge is the central character and narrator? Or would portray Poseidon as an accountant? ... it does seem to me that the translator Peter Wortsman has been able to create a sense of Kafka's own voice in this book - a voice that is humane and at times humourous, that presents the surreal as if it was the normal." - Zoe Brooks, Magical Realism


"Not only does the excellence of the translations in Peter Wortsman's Konundrum: Selected Prose of Franz Kafka delight, but he wisely decided to mix-and-match a number of Kafka’s texts, fiction and non-fiction. Not only are the oft-printed stories (“In the Penal Colony,” “The Hunger Artist”) here, but diary entires, parables, and excepts from letters. The result is a distinctive vision of the writer — not the “patron saint of neurotics” beloved by the 20th century, but a black comic absurdist who seems particularly apt for the 21st century." — Bill Marx, The Arts Fuse
or
Not Currently Available for Direct Purchase
Copyright © 2020 American Booksellers Association