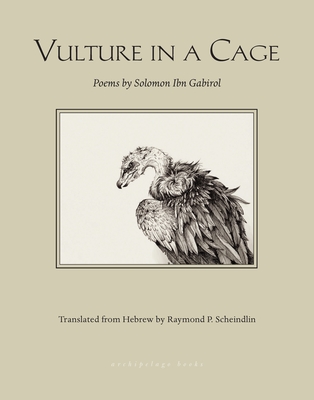 Vulture in a Cage (Paperback)

"Vulture in a cage," Solomon Ibn Gabirol's own self-description, is an apt image for a poet who was obsessed with the impediments posed by the body and the material world to the realization of his spiritual ambition of elevating his soul to the empyrean. Ibn Gabirol's poetry is enormously influential, laying the groundwork for generations of Hebrew poets who follow him--rocky and harsh, full of original imagery and barbed wit, and yet no one surpassed him for the limpid beauty of his devotional verse. His poetry is at once a record of the inner life of a tormented poet and a monument to the Judeo-Arabic culture that produced him. This book contains the most extensive collection of Ibn Gabirol's poetry ever published in English.

Solomon ben Judah Ibn Gabirol (sometimes Latinized as Avicebron) was a Andalusian-Hebrew theologian, philosopher, and poet from the 11th century, who left behind a body of work that contains singularly profound meditations on the nature of the sacred, and the relationship between the subject and divinity. These poetic writings on himself are far from solipsistic, rather, through the lens of selfhood, Solomon Ibn Gabirol works to understand the realms of the transcendental and the mystical as experiences that are inseparable from the personal reality of the individual. What links all of his work is an expressionistic descriptiveness and for this, the poetry of Solomon ibn Gabirol has been acclaimed for almost a millennium; his ability to portray the grand majesty of the cosmos through the complexity of the individual, is truly timeless.

Praise For Vulture in a Cage: Poems by Solomon Ibn Gabirol…

"Ibn Gabirol's poetry is enormously influential, laying the groundwork for generations of Hebrew poets who follow him--rocky and harsh, full of original imagery and barbed wit, and yet no one surpassed him for the limpid beauty of his devotional verse." — Jewish Book Council

"This detailed depiction of a winter scene is among the treasures in Raymond P. Scheindlin’s new book of flowing English translations of secular and sacred poems by Solomon Ibn Gabirol..." — Haaretz

"Ibn Gabirol sets the archetype for spiritual turbulence in all subsequent Jewish poetry. ...A bitter personality and yet a sublime visionary." — Harold Bloom

"[Solomon Ibn Gabirol's] poetry was written in a style that did not conform to the esthetics of his age but that today is part of the way we live." — Amos Lassen

"Such unpredictable, uniquely structured poems, intent on self-expression, were written... most strikingly by Solomon Ibn Gabirol. His personal poems reveal a divided spirit trying in vain to achieve wisdom and peace of mind, a man isolated from society, hated and feared by people who were unable to comprehend his philosophy...The speaker in these poems... is torn between hate, fear, and pride, but miraculously triumphs over himself... His imagery is full of surprises... Ibn Gabirol added a new dimension – searching introspection – to Hebrew poetry." — Dan Pagis, Hebrew Poetry of the Middle Ages and the Renaissance