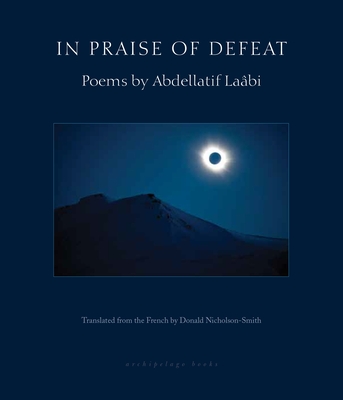 In Praise of Defeat (Paperback)

One of the central writers and thinkers in contemporary Maghreb letters and banned by the Moroccan government, Abdellatif Laabi's poetry is increasingly influential on the international scene and spans six decades of political and literary change, innovation, and struggle. Including a wide range of work, from piercing domestic love poetry to a fierce lyricism of social resistance informed by nearly a decade spent in prison for "crimes of opinion," all of Laabi's poetry is situated firmly against tyranny and for life--an almost mythic sense of spiritual and earthly joy emanates from this resistance through the darkness of political oppression. This selection of poetry has been masterfully rendered into English for the first time by Donald Nicholson-Smith and introduced by the eminent poet and critic Pierre Joris--the first in translation to be chosen by Laabi himself.

Abdellatif Laabi is regarded as one of the most important contemporary Moroccan writers, publishing many volumes of poetry, as well as several novels and plays since the late 1960s. Laabi has consistently criticized the authoritarian and theocratic regimes of the Maghreb with an outspoken incisiveness that has led to the closure of his seminal literary journal Souffles as well as his eight-year imprisonment from 1972-1981. His work has been banned and marginalized by the Moroccan government, however Laabi's writings have been increasingly visible and influential on the international scene. During Laabi's imprisonment his cause was championed by Amnesty International prisoner of conscience, and he was awarded the Prix de la Liberté, PEN Club, and the Prix International de Poésie.

Praise For In Praise of Defeat: Poems by Abdellatif Laabi…

"A career-spanning collection of poetry from Morocco’s poet of protest, In Praise of Defeat gives the reader a time-lapse tour of Abdellatif Laâbi’s expansive poetic voice in development." — World Literature Today

"We should not reach for In Praise of Defeat to assuage our fear and anger at the current administration, but we should reach for this book, and for Laâbi's works in general, to seek strength and courage to nourish for own resistance." — Zyzzyva

"There is unfathomable beauty and unspeakable sorrow laced throughout this 800-page bilingual opus of poems by Moroccan writer Abdellatif Laâbi, which speaks to his feeling of exile from his own language and his displacement within his own country, mired in the mess of colonialism. Donald Nicholson-Smith skillfully carves out a space for English to accommodate Laâbi’s vigorous and vital voice." — Emma Ramadan, Riffraff bookstore, in Center for the Art of Translation favorite translated books of the decade

"In Praise of Defeat allows us the rare pleasure of watching a revolutionary mind work tirelessly over time and through all manner of political weather in pursuit of that route -- it's a towering demonstration of what it means to make poetry, and its capacity to dignify and elevate the small and sometimes miserable details of struggle into a practice of struggle." --Ryan Kaveh Sheldon, American Book Review

"Brilliantly and feelingly translated by Donald Nicholson-Smith, this collection has been nominated for the Best Translated Book Award, and if there’s any justice in the world, it will win it." — Jewish Currents

"Each poem testifies to Laâbi's revolt against silencing, oppression, and exclusion, promoting an alternative world based on resistance, love, and commitment...Laâbi reaffirms the ability of poetry to transcend borders, celebrate human desires, and denounce atrocities and horror, from Madrid to Baghdad." — The Poetry Review (UK)

"Laâbi is by some credited ... with re-invigorating French poetry and outdoing the poets of metropolitan France... Laâbi’s writing has become a constant taking stock in relation to the ominously changing world, continually raiding the inarticulate, pitting himself against ‘aphasia’ and the self-imputation of failure, painting an apocalyptic picture but eventually sounding the soft music of hope... In Praise of Defeat is a lovable brick of 800+ pages..." —Leslie Bell, PN Review

"Laâbi spent several years in prison and then was exiled.  Through it his poetry has remained distinctly humane, reachable, direct and impassioned. Somehow Laâbi has been able to find light in a world determined to regale the force of darkness." — Michael Dennis, Today's Book of Poetry (blog)

"Keeping pace with the long poems that are Abdellatif Laâbi's distinctive achievement – the poems of torture and imprisonment in Morocco, or 'People of Madrid, Pardon' written in response to the train bombings of 2004 – an English-speaking reader like me inevitably keeps waiting for the public voice, the high style of anger and compassion, to falter or overreach.  But Laâbi's voice does neither.  Donald Nicholson-Smith's translations hold fast to this poetry's unnerving eloquence and simplicity, and its hell-for-leather speed."  —T.J. Clark

"Laâbi's poetic voice consistently raises a song of possibilities above the dirge of cruelty." -- Victor Reinking

"The great power and subtlety of the work lies in the fine balance it strikes between that Peter Pan-like sensitivity, vulnerability and imagination, and the brutality of the real world, history and politics." -- The Daily Star (Lebanon)

"That Laâbi recognizes the link between understanding our time and understanding memory is profound, and should serve as an example to other authors." -- Jordan Anderson, The Coffin Factory

"As the new collection In Praise of Defeat, deftly translated by Donald Nicholson-Smith, shows, Laâbi’s early poems are poems of protest and of incarceration. They powerfully evoke the need for poetry to bear witness...In Praise of Defeat presents a poet-activist who was born in the direst possible circumstances, survived them, and has continued on a trajectory of art and activism. He shows any poet how the artistic space created by “poet, activist, former prisoner, exile” is the space where the most crucial acts of art happen." — Emily Wolahan, The Quarterly Conversation

"As In Praise of Defeat shows, Laâbi’s early poems are poems of protest and of incarceration. They powerfully evoke the need for poetry to bear witness." — Two Lines Press

"Laâbi has always been interested in inviting his readers to imagine what it would look like for a society to publicly honor, rather than privately imprison, the poets responsible for unmaking its own language." -- Max Nelson, The Paris Review
or
Buy Here
Copyright © 2020 American Booksellers Association