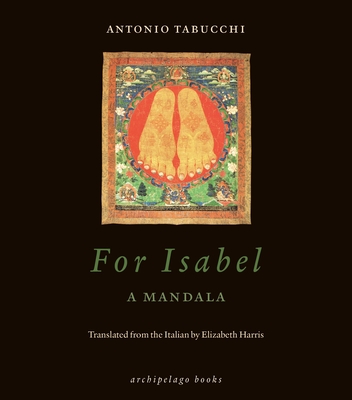 Winner of the 2018 Italian Prose in Translation Award

A metaphysical detective story about love and existence from the Italian master, Antonio Tabucchi. When Tadeus sets out to find Isabel, his former love, he soon finds himself on a metaphysical journey across the world, one that calls into question the meaning of time and existence and the power of words.

Isabel disappeared many years ago. Tadeus Slowacki, a Polish writer, her former friend and lover, has come back to Lisbon to learn of her whereabouts. Rumors abound: Isabel died in prison under Salazar's regime, or perhaps wasn't arrested at all. As Tadeus interviews one old acquaintance of hers after the next, a chameleon-like portrait of a young, ideological woman emerges, ultimately bringing Tadeus on a metaphysical journey across the continent. Constructed in the form of a mandala, For Isabel is the spiraling search for an enigma, an investigation into time and existence, the power of words, and the limits of the senses. In this posthumous work Tabucchi creates an ingenious narration, tracing circles around a lost woman and the ultimate inaccessible truth.

Praise For For Isabel: A Mandala…

" The story’s procedural structure rather pleasingly echoes an episode of “Law and Order.” But to Tadeus the encounters represent the concentric circles on a mandala, a symbol of wholeness in Indian philosophy. . . this tantalizing, quicksilver novel, subtly translated by Elizabeth Harris, illuminates a soul in transit, yearning to complete the story that will release him from his suffering." — Sam Sacks, in The Wall Street Journal

"Planes of existence are crossed, and the dead brought back to life, in order to reach the center of Tabucchi's project. Luckily, that center is worth its intrigue. Isabel's path through life, and the narrator's path following her, is filled with brilliant twists and turns, spanning continents and lifetimes. Even a clever reader won't be able to guess every direction the story takes." -- Noah Cruickshank, the Field Museum, in Shelf Awareness

"[A] mandala of regret and forgiveness. In this sense, For Isabel, with its easy prose and vibrant scenes, may speak to anyone." — World Literature Today

"[A] detective story, a fable of sorts, a tour of European cities and a series of wild and eccentric characters...  It’s a cliché to say it’s about the journey instead of the destination, but For Isabel finds a clever way to say it. 'Just think of me as someone who searches,' Tadeus says. And throughout the novel, the search is satisfying." — GQ

"[FOR ISABEL is] more than the story of a missing girl; it is history recalled as though in a dream, hovering briefly, through the combination of Tabucchi’s elegiac prose and Harris’s lucid translation, over life and death." — Publishers Weekly (Starred Review)

"[O]ne man is journeying through concentric circles of evidence to uncover deeper ideas about truth ... [T]here's a satisfying richness to the whole, and translator Harris gracefully navigates the narrator's tonal shift from gumshoe to spiritual seeker, making the story lyrical and surprising while avoiding airiness. An ... engaging jaunt into the ineffable." — Kirkus Reviews

"Tabucchi’s language is spare and lyrical, his narrative lush in history and character, and the novel ends on a quietly peaceful note that seems a fitting farewell to the author himself. For literary readers who like a mystical touch." — Library Journal

"The book has a mercurial, dream-like quality that is stunning in its subtlety. Never heavy-handed, this quiet novel is as beautiful and profound as a landscape painting." — Mark Haber, Brazos Bookstore

"…A charming, eerie little tale -- politically tinged, with a touch of mystery to it, and a spiritual element, yet none of which weigh too heavily on the story. For Isabel is, in the best sense, weird, with its unusual feel and (ir)reality." — M.A.Orthofer , The Complete Review

"Part mystery, part romance, and part meditation on cosmic matters... For Isabel resists grandiosity and thrives in quiet moments of human connection. Elegant but unpretentious... Elizabeth Harris’ translation from the Italian preserves the meandering, dreamlike atmosphere of the story, the concentric circles of meaning around reconciliation and the unbounded nature of time." — Arkansas International

"For Isabel is not just a satisfactory rounding-off of Tabucchi’s career, but a fantastic coda to it. . . To find one’s way through For Isabel is certainly not easy, but it is rewarding, and its joyful confusion always rests firmly on the edge of genius, ready to be found." — Times Literary Supplement

"[T]he author’s final love letter to Portugal, a nation he loved as much as his own. It is an idyll for obsessives, a love song for the long ago and a poem for people and places that live in our hearts forever." —Jim Ruland, San Diego City Beat

"The book is filled with evocative images that seem to float free of mere plot constraints: a string bag of captive frogs let loose in the family garden, a saxophonist in a jazz bar playing to a drinker of absinthe, a single mourner at a faked funeral in a sailor’s chapel by the sea...Harris carries the delicate magic of consciousness from Italian into English with deceptive ease. She works with admirable precision to capture the voices of the different speakers and the details of the shifting context, yet she never sacrifices the dreamy texture of the writing." — American Literary Translators Association judges

"[A]n expertly crafted work, like a mandala, slowly a cohesive picture comes into place, just like the sands of many colours placed on the plain canvas in front of you... Another beautifully crafted and subtle tale from the pen of Antonio Tabucchi, a story of grief, a search for meaning, a travelogue, the eternal pursuit of happiness." — Tony Messenger, Messenger's Booker (and more)

"The one hundred luminous pages of For Isabel follow the narrator, Tadeus... Not only does he learn of Isabel’s fate, but he also arrives at a clearer understanding of photography, of writing, of the impermanence of life itself... Translated elegantly and seamlessly by Elizabeth Harris." — Natalia Sakissian, Numéro Cinq Magazine

"An essential testament to Tabucchi's talent, a masterwork written with diligence and care... The novel is an epitome of Tabucchi's work, an account of exotic travels and blossoming, abstruse identities, a dream-like and ironic limbo... Literary alchemy." -- Javier Aparicio Maydeu, El Pais

"A masterfully written work made of pauses and delays, realistic details and openings into the fantastic... Tabucchi's art is deployed here in all its force and fascination. It wins us over once again." -- Fabio Gambaro, Le Monde

"Tabucchi enters and expands his fictional universe, revisiting his beloved Lisbon and advancing his reflections on being and time. The novel is a perfect mix of diverse elements, of sudden twists and geographic flights; the plot is crafted with exquisite mastery, the story both engages and provokes." -- Paolo Mauri, La Repubblica

Antonio Tabucchi was born in Pisa in 1943 and died in Lisbon in 2012. A master of short fiction, he won the Prix Médicis Étranger for Indian Nocturne, the Italian PEN Prize for Requiem: A Hallucination, the Aristeion European Literature Prize for Pereira Declares, and was named a Chevalier des Arts et des Lettres by the French Government. Together with his wife, Maria José de Lancastre, Tabucchi translated much of the work of Fernando Pessoa into Italian. Tabucchi's works include The Flying Creatures of Fra Angelico, The Woman of Porto Pim, Time Ages in a Hurry, and Tristano Dies (all from Archipelago).
Elizabeth Harris’s translations from Italian include Mario Rigoni Stern's novel Giacomo's Seasons (Autumn Hill Books), Giulio Mozzi's story collection This Is the Garden (Open Letter Books), and Antonio Tabucchi's novel Tristano Dies (Archipelago Books). Her awards include a 2013 PEN/Heim Translation Fund Grant and the 2016 National Translation Award for Prose, both for Tabucchi’s Tristano Dies. A professor of creative writing for many years, Harris now translates full-time. She lives with her family in a small town in Wisconsin, along the Mississippi.
Loading...
or
Not Currently Available for Direct Purchase