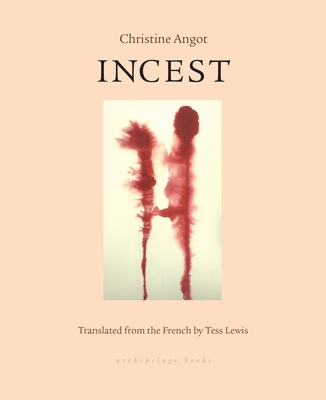 A daring novel that made Christine Angot one of the most controversial figures in contemporary France recounts the narrator's incestuous relationship with her father. Tess Lewis's forceful translation brings into English this audacious novel of taboo.

The narrator is falling out from a torrential relationship with another woman. Delirious with love and yearning, her thoughts grow increasingly cyclical and wild, until exposing the trauma lying behind her pain. With the intimacy offered by a confession, the narrator embarks on a psychoanalysis of herself, giving the reader entry into her tangled experiences with homosexuality, paranoia, and, at the core of it all, incest. In a masterful translation from the French by Tess Lewis, Christine Angot's Incest audaciously confronts its readers with one of our greatest taboos.

AUTHOR: Christine Angot is one of the most controversial authors writing today in France. Born in 1958 in Châteauroux, Angot studied law at the University of Reims and began writing at the age of 25. After six years of rejections, Angot published her first novel, Vu du ciel, the story of woman named Christine told from the perspective of an angel who died after being raped as a little girl. Her subsequent novels have dealt with a variety of taboo topics, including homosexuality, incest, and sexual violence, and have continually blurred the line between autobiography and fiction. Ever since gaining widespread notoriety with the 1999 publication of Incest, Angot has remained at the center of public debate and has continued to push the boundaries of what society allows an author to express.

TRANSLATOR: Tess Lewis is a translator from German and French and an Advisory Editor of The Hudson Review. She has been awarded translation grants from PEN America and PEN UK, an NEA Translation Fellowship, and a Max Geilinger Translation Grant for her translation of Philippe Jaccottet.

"A sensation in France, [INCEST is a] novel in the form of a wild confession of a life filled with trauma..." — The New York Times

"Written in emotional, stream-of-consciousness prose, Incest can often feel agitated and erratic, perfectly capturing the shattered inner world of its narrator, who is suggested throughout to be the author herself. . . Incest challenges, disgusts and confounds, making it a moving and memorable contribution to contemporary literature. Angot's work of auto-fiction confronts the brutality and pervasiveness of desire and will appeal to those both fascinated and terrified by explorations into the darkness of human nature." — Shelf Awareness

"Angot is being most truthful when she is discussing her choices as a writer. On one level, I see this book as a treatise on writing itself." —Electric Literature

"At times reminiscent of playwright Sarah Kane, particularly in her incantatory free associations ... Incest is remarkably prescient. Christine Angot pinpoints how technology antagonizes mental health; how a lack of immediate reply can give the obsessive mind no room to breath." — Rebecca Watson, The Times Literary Supplement

"Given Angot’s antagonism toward conventional syntax, the English translation, by Tess Lewis, is a feat of perspicuity. . . When “L’Inceste” was first published, an interviewer asked Angot what she hoped to achieve. “My ambition is to be unmanageable,” she said. “That people swallow me and at the same time cannot digest me.”" — New Yorker

"Angot’s writing reclaims the confession as a radical act—spiritual, even...At its core, Incest is a true testament to the subversive power of literature." — Elizabeth Baird, The Millions

"A 2013 Telegraph article labelled Angot as 'France’s Queen of Shock-Fiction.' This seems to imply that there’s something inauthentic about Angot. But there’s nothing inauthentic about the way she examines incest’s effect on her character’s cognition, or her ability to derive meaning and draw connections from even the most horrific of personal experiences."   —Rebecca Rand, ZYZZVA

"Angot works the spirit over. One is exhausted, but one also cries, Finally, an authentic experience! Rude and raw, artful but brash and unpredictable...This is what we might all hope to write, to make, to communicate. This should be everyone’s letter to the world. Let us hope more of Angot’s work reaches the English-speaking world, and soon." --David Pratt, Lambda Literary

"[INCEST] creates a space where imagination, potential futures, and pasts mingle with experiences, where the ‘I’ slips from the author to the narrator and gets lost in the vortex of language; it is language that speaks—the writer just writes... Voices echoing from the fractures, this is Incest: a collective adventure for the one that writes and the ones that read." — Giorgos Kassiteridis, Asymptote

"[Incest] is rich, intimate, and pulls you in... [Angot's] books are an incantation, biblical in their onrush of verbs, nouns, names, and deliberate repetitions in the service of rhythm and camouflage, compelling you to read on, for sound, for cadence, for poetry... Take Incest into your arms and let yourself experience Angot as you would music, or an image of great evocative power." —Tsipi Keller, Asymptote Journal

"[A] brilliant portrait of a brain almost continually on fire with self-loathing... both a mesmerizing and harrowing ride... I believe Angot has done something truly spectacular here... How many of us have been lost in darkness and unable to think our way out of it? Angot’s life is lived in that state—a state of perpetual chaos and dejection. And she has used her brazen, fierce intelligence to translate this reality to the page in a way that reveals her brilliance as a writer and her sadness as a human being. Her journey is one you will never forget." —Elaine Margolin, Truth Dig

"The exquisite frenzy of the novel is captured masterfully in Tess Lewis’ translation, which preserves not just the passion and the mania of Angot’s narrator, but her wit and her wordplay as well. Lewis has managed to get inside the narrator’s head and translate her essence and energy, as well as her words, perfectly into English." —The Arkansas International

“Incest is a thrilling book. It's a formally daring and passionate performance of the depths of human self-loathing, and the sufferings of attachment. It cut deep inside me with its truths. In every moment of reading it, I both wanted to keep reading it and wanted to write. I don’t think I will ever forget this book.” — Sheila Heti, author of How Should a Person Be?

"A maximalist in the art of emotion, Angot unmasks with frightening precision the roiling heart and the sharp edges of lust, loathing, and scorn lodged within love's fossil record.  This is a book that points you toward the subterranean roots of your own emotions, the intricacies and murk we cover up in the name of normal daily operations." — Alexandra Kleeman, author of You Too Can Have a Body Like Mine

"[Incest] stylistically, is near perfection.. I would recommend this novel to anyone, especially fans of modern/contemporary literary fiction or experimental fiction." — Matthew E. Jackson

"I feel that books like this HAVE to be written to keep the landscape of modern literature fresh, live and moving forward." — Bookish Lara

"All said and done, Christine Angot is rock 'n' roll. Not what it became, but what it should never have ceased to be: raw, concise, radical, subversive.... Angot serves as a mirror, revealing to her readers all their paradoxes and contradictions." --Françoise-Marie Santucci, Libération

"It is clear that Christine Angot has won, because we are going to be thinking for a long time about this book. Because it will need a long study written about it in order to examine all of its hypotheses, its contradictions, understand the questions it puts forward, study its passion, disgust, insanity, the dream of controlled incest, the fantasy of incest fulfilled....What's at play in the work of Angot, in her force, her violence, is an idea of literature as a means of escaping from every collective, from all policing ... to think and write in one's singularity." --Josyane Savigneau, Le Monde

"Auto-fiction at its extreme does not aspire here to shock but to give literature back its dangerous function and return to it its dignity." --Gérard Meudal
or
Buy Here
Copyright © 2020 American Booksellers Association