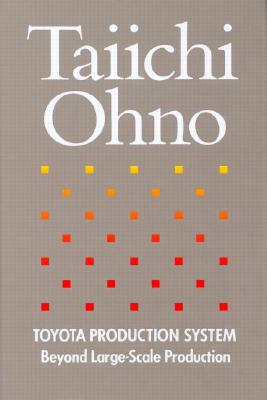 In this classic text, Taiichi Ohno--inventor of the Toyota Production System and Lean manufacturing--shares the genius that sets him apart as one of the most disciplined and creative thinkers of our time. Combining his candid insights with a rigorous analysis of Toyota's attempts at Lean production, Ohno's book explains how Lean principles can improve any production endeavor. A historical and philosophical description of just-in-time and Lean manufacturing, this work is a must read for all students of human progress. On a more practical level, it continues to provide inspiration and instruction for those seeking to improve efficiency through the elimination of waste.

TAIICHI OHNO was born in Dairen (Port Arthur), Manchuria, China, in February 1912. In 1932, after graduating from the department of mechanical engineering, Nagoya Technical High School, he joined Toyoda Spinning and Weaving. In 1943-, he was transferred to the Toyota Motor Company where he was named machine shop manager in 1949. He became Toyota's director in 1954, managing director in 1964, senior managing director in 1970, and executive vice president in 1975. Although he retired from Toyota in 1978, Mr. Ohno continues as chairman of Toyoda Spinning and Weaving. He resides in Toyota-shi, Aichi-ken. This book first appeared in Japan in May 1978 and reached its twentieth printing in February 1980. Productivity Press's 1988 edition is the first printed for the English-reading public
Loading...
or
Not Currently Available for Direct Purchase