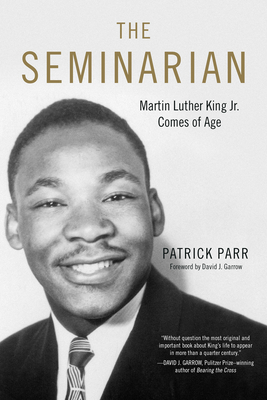 2018 and 2019 Washington State Book Award Finalist (Biography/Memoir) • Excerpted in The Atlantic and Politico • TIME Magazine – One of 6 Books to Read in Honor of the 50th Anniversary of Martin Luther King Jr.'s Death

Martin Luther King Jr. was a cautious nineteen-year-old rookie preacher when he left Atlanta, Georgia, to attend divinity school up north. At Crozer Theological Seminary, King, or “ML” back then, immediately found himself surrounded by a white staff and white professors. Even his dorm room had once been used by wounded Confederate soldiers during the Civil War. In addition, his fellow seminarians were almost all older; some were soldiers who had fought in World War II, others pacifists who had chosen jail instead of enlisting. ML was facing challenges he’d barely dreamed of.

A prankster and a late-night, chain-smoking pool player, ML soon fell in love with a white woman, all the while adjusting to life in an integrated student body and facing discrimination from locals in the surrounding town of Chester, Pennsylvania. In class, ML performed well, though he demonstrated a habit of plagiarizing that continued throughout his academic career. But he was helped by friendships with fellow seminarians and the mentorship of the Reverend J. Pius Barbour. In his three years at Crozer between 1948 and 1951, King delivered dozens of sermons around the Philadelphia area, had a gun pointed at him (twice), played on the basketball team, and eventually became student body president. These experiences shaped him into a man ready to take on even greater challenges.

Based on dozens of revealing interviews with the men and women who knew him then,The Seminarian is the first definitive, full-length account of King’s years as a divinity student at Crozer Theological Seminary. Long passed over by biographers and historians, this period in King’s life is vital to understanding the historical figure he soon became.

"King's three years at the Crozer Theological Seminary, south of Philadelphia, marked an important turning point in his life and are well worth the exclusive focus they get in this compact, readable and well-researched book."
—The Washington Post

"More than anything else, it's Mr. Parr's willingness to dig that impresses and makes The Seminarian an original, much-needed and even stirring book about King's formative years at Crozer...Mr. Parr deserves credit for leaving no page in King's academic record unturned."
—The Wall Street Journal

“Without question the most original and important book about King’s life to appear in more than a quarter century.”
—David J. Garrow, Pulitzer Prize–winning author of Bearing the Cross and Rising Star

"Parr is a wonderful guide through this pivotal season of King’s intellectual development, spiritual formation, and youthful angst. We feel the young seminarian’s anxiety as he arrives at a predominantly white school, we witness his encounters with the North’s less flamboyant but equally treacherous brand of racism, and we experience the heartbreak of his short-lived romance with a white student... Grounded in exhaustive, primary-source research, the narrative bounds forward with an energetic curiosity that resembles the bright and restless spirit of its young protagonist."
—Christianity Today

“Parr provides a delightful (and deep) exploration of King’s formative years, a period that even the most committed scholars have undervalued or overlooked altogether. King’s years at Crozer are recounted here with such clarity the reader nearly sits next to him through every class and social engagement, so that a mere glance to the right and we fall in among his many classmates who are interviewed here.  The Seminarian is for the scholar and general reader alike who want to learn how a kid from Atlanta slowly matured into our nation’s greatest civil rights leader.”
—W. Jason Miller, author of Origins of the Dream: Hughes’s Poetry and King’s Rhetoric

“Not only an engrossing biographical study but an essential source for anyone with a serious interest in the formative years of Martin Luther King Jr.”
—Clayborne Carson, editor of A Call to Conscience: The Landmark Speeches of Dr. Martin Luther King, Jr.

"Concern about such whitewashing is part of what motivated Patrick Parr to write The Seminarian...Parr has done some impressive digging in the historical record and there is no doubt that scholars writing about King will find The Seminarian useful. The book should also attract students and faculty at seminaries and divinity schools, who will be interested not only in the particularities of King’s experience at Crozer but also in the fascinating picture that emerges of a mid-20th-century theological education."
—The Christian Century

"The Seminarian is a clear-eyed and honest account of some transformative experiences in the life of the gifted young man who would become a cultural icon."
—Kirkus Reviews

"Historian Parr's debut work of nonfiction is a true life bildungsroman...Often overlooked or relegated to mere footnotes in previous biographies, Parr highlights this short, influential period in King's life, fleshing out the details of courses, teachers, mentors, pals, and dates, and presenting a fresh portrait of King, the 'rookie preacher.'"
—Publishers Weekly

"This book provides by far the most thorough and detailed treatment of Martin Luther King's experience in seminary. Anyone interested in King should be thrilled that Patrick Parr pored closely over the seminary records and interviewed surviving members of his cohort of seminarians (plus his sweetheart). Count this volume among the small number of indispensable books about King.”
—Keith D. Miller, author of Voice of Deliverance and Martin Luther King's Biblical Epic

“Seminary training doesn’t always dictate the course of leaders’ lives, sometimes even steering them directly opposite. Yet the time is always formative. Through his careful research, Patrick Parr has produced a stunning piece of work illumining this little-known part of Martin Luther King, Jr.’s journey of stumbling through learning to integrate theology, life, and the real world as he grew into the great American leader he became.”
—Jason S. Sexton, Editor, Boom California

"Through scrupulous research and interviews with King’s peers...Parr puts the reader in the classroom with King...Worrying about grades and girls, this ML is as familiar as a student of today." —Akron Beacon Journal

“Written in a smooth and eminently readable style and providing unprecedented and important material, The Seminarian is certainly a go-to book for anyone researching King’s life.”—PopMatters

“The chief value of Parr’s book is to remind us that King was once a questing student who learned new things, made mistakes, shot pool, had girlfriends, and laughed.” —New York Review of Books

Patrick Parr has written about Dr. King for magazines and newspapers such as the Atlantic,Seattle Magazine, and the Japan Times. He worked as a historical consultant for the New Jersey Historical Commission, helping to decide on nominated Martin Luther King Jr. landmarks. In 2014, he was awarded an Artist Trust Fellowship.

David J. Garrow is the Pulitzer Prize–winning author of the King biography Bearing the Cross and Rising Star: The Making of Barack Obama.