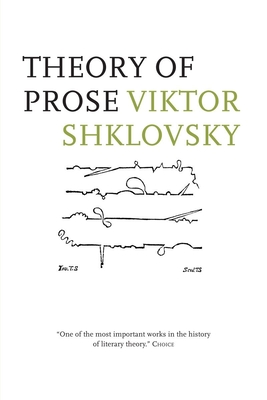 Theory of Prose is one of the twentieth century's most important works of literary theory. It not only anticipates structuralism and poststructuralism, but poses questions about the nature of fiction that are as provocative today as they were in the 1920s. Arguing that writers structure their materials according to artistic principals rather than from attempts to imitate reality, Shklovsky uses the works of Cervantes, Tolstoy, Sterne, Dickens, and others to give us a new way of thinking about fiction and the world.

Viktor Shklovsky (1893-1984) was an originator and leading theoretician of the Russian Formalist school, and was also active in films and children's literature. Several of his books are available from Dalkey Archive Press, among them "Sentimental Journey," "Third Factory," and "Zoo, or Letters Not about Love."
Loading...
or
Not Currently Available for Direct Purchase