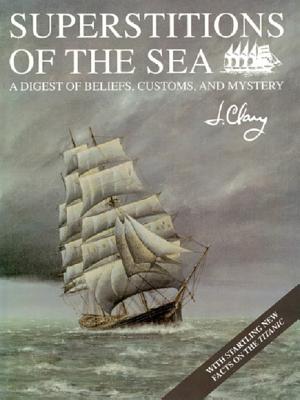 Superstitions of the Sea (Paperback)

A Digest of Beliefs, Customs, and Mystery

Combining captivating sketches by his brother, artist Ben Clary, and his own prized ghost ship portrayals, Jim Clary presents a compelling and riveting digest of beliefs, customs, and mystery in Superstitions of the Sea. Clary focuses on the vast array of strange, mythical, and often comical beliefs of mariners from ancient times to the present. Collecting the various topics for years. Clary found that maritime superstition was weaved throughout every fabric of his study. So interesting was the folklore that it often lured him far away from his subject search and held him spellbound for hours at a time. Clary offers a unique and encompassing classification of maritime superstitions, including anecdotes on: animals, burial, charms, demons, evil eyes, figureheads, ghost ships, hexes, icebergs, Jonahs, knots, launchings, myths, navigation, omens, people, romance, shipwrecks, triangles, the unexplained, Vikings, and weather phenomena. He combed through countless age-old volumes and interviewed today's sailors to bring to the reader incredible yarns and unbelievable recorded fact enshrouded in mystery.

The prolific and unquestionable talent of marine artist, author, and historian Jim Clary is traced to his early days as a schoolboy. He remembers vividly having his ears boxed while drawing in arithmetic. Yet his love for th sea and ships no doubt began during those early years when he lived near the Detroit River, fishing and playing amid the sea gulls and the beckoning whistles of passing vessels. This environment, he believes, established his strong desire to paint ships. So when the family moved to the rural town of Richmond, Michigan, he spent much of his time in nearby St. Clair, a small town along the St. Clair River, deepening his interest in ship's lore and led him to devote his full talents to painting ships and collecting bits and pieces of maritime history. Like most of the famous marine artists of the past, Clary is self-taught. Hungry for and fascinated by maritime lore, his natural talent evolved through the combined effort of drawing and the love and knowledge of ships. Thus having relied on extensive study and experience, his works are profound statements of historical accuracy and articulate detail - a trademark that made him famous.
or support indie stores by buying on
Copyright © 2020 American Booksellers Association