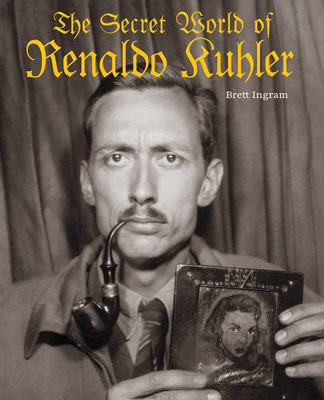 A sumptuous monograph presenting for the first time the extraordinarily imaginative and delightful work of visionary artist Renaldo Kuhler (American, 1931-2013). The Secret World of Renaldo Kuhler catapults a thrilling new discovery into the pantheon of the most accomplished visionary--or "outsider"--artists. Like Henry Darger, Howard Finster, George Widener, and Adolf W lfli, Renaldo Kuhler was an exceptionally gifted artist and possessed an imagination all his own. By day Kuhler was a self-taught scientific illustrator under the employ of the North Carolina Museum of Natural Sciences, for which he created thousands of wonderfully precise illustrations of myriad natural history specimens--reptiles, fish, turtles, and the like. Renaldo Kuhler was an unusual individual, as was instantly clear from his appearance alone. Six-foot-four, with a white beard and ponytail, he wore a custom-tailored uniform consisting of a sleeveless Kelly green suit jacket with wide, black, notched lapels, epaulets, and brass buttons, a matching suit vest, yellow flannel dress shirt, a fleur-de-lis Boy Scout neckerchief, and tight-fitting knee-length shorts ("cotton-blend lederhosen"). However, unbeknownst even to family, friends, and coworkers, Kuhler was more than an eccentric, gifted scientific illustrator. He was a prolific visionary artist, who, as a teenager in the late 1940s, invented an imaginary country he named Rocaterrania--after Rockland County, New York, where he had lived as a child. For the next sixty years, in secret, he illustrated the nation's entire history and the prominent characters of its populace. Rocaterrania is a fantastical world, a richly illustrated amalgam of Kuhler's personal cultural and aesthetic fascinations. Situated just north of the Adirondacks in New York, at the Canada-United States border, Rocaterrania is a sovereign nation of immigrants, from Scandinavia to Eastern Europe. Kuhler invented a complete world populated by a royal family and a succession of leaders resembling historical Russian figures, Women reminiscent of Marlene Dietrich and Janet Leigh play important roles as do bearded men of a seeming Hasidic Jewish heritage, men bearing curious physical similarities to American presidents, and neutants--individuals neither male nor female. Amid forests, mountains, lakes, and rivers, Kuhler's imaginary country is made up of provinces and cities filled with distinctive Rocaterranian architecture and well-planned railroad and metro systems. Its government is unique, and it has its own religion, Ojallism, and its own evolving language and alphabet. With an organized labor service, a prison system (modeled after a New Jersey state penitentiary), a university system, a Rocaterranian Olympics, and an independent movie industry, Rocaterrania is a nation bustling with dozens of characters and their intrigues. Initially meant to be an escape, Kuhler's Rocaterrania became a secret lifelong obsession, an intricately coded, metaphorical account through Rocaterrania's tumultuous history, which dovetailed with Kuhler's own struggles for independence and freedom. Renaldo was the son of the German-born industrial designer Otto Kuhler, renowned for his Art Deco-era streamlined trains; his Belgian mother had little patience for her son, who was ostracized and bullied throughout his life for being "different." The Kuhler family moved in 1948 from Rockland County, New York, to a remote cattle ranch in the Colorado Rockies--an unbearably isolated environment for the teenaged Renaldo. Retreating to his sketchbooks, journals, and watercolors to invent his imaginary nation of Rocaterrania, young Kuhler wrote, "The ability to fantasize is the ability to survive." The Secret World of Renaldo Kuhler is filled with more than 400 illustrations in pencil, ink, acrylic, oil, gouache, watercolor, colored pencils, and markers, demonstrating Kuhler's phenomenal draftsmanship and wide range of style--from delicately shaded graphite works to comic-book ink drawings. Complementing Kuhler's impressive artistry is his gift for analogical thinking, which flowered in his appropriation and reimagining of personalities, places, and events from world history to form a cohesive and fully imagined world. After decades of secrecy, Kuhler eventually first shared his work and the story of his imaginary country with filmmaker Brett Ingram, whom he met by chance in the mid-1990s. In 2009 Ingram released Rocaterrania, a feature-length documentary with prized footage of Kuhler at home and at work, and talking about his creation. With The Secret World of Renaldo Kuhler Ingram has written the complete story of Rocaterrania as relayed to him over time by Kuhler, resulting in a fascinating, highly entertaining first and major book about this rare, newly discovered, full-blown visionary outsider artist.

Brett Ingram is the director of two documentary features, Monster Road and Rocaterrania, and 20 short films. His work has screened on SundanceTV, PBS, National Geographic, Animal Planet, and at hundreds of film festivals, museums, and cinemas around the world. Formerly an electrical engineer on the Space Shuttle Main Engine Program, Ingram is a Guggenheim fellow and has taught filmmaking at Wake Forest University, the Center for Documentary Studies at Duke University, and the University of North Carolina Greensboro. He is director of the Renaldo Kuhler Archive.
or
Buy Here
Copyright © 2020 American Booksellers Association