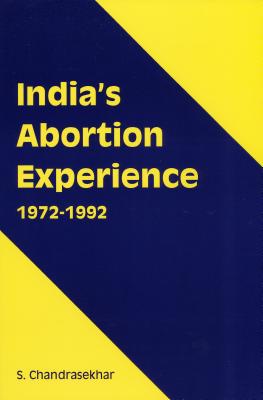 The reissue and updating of this book, originally designed to make a case for the liberalization of the law then in force in India, was undertaken to review how the Act was implemented and to explore how such an act can affect poor women of the Third World countries.

India’s story is important when viewed against the quasi-violent attitudes and activities of populations considerably more literate, “educated”, and sophisticated than that of India, on the subject of what are popularly called the “abortion wars” of the United States and Europe.

S. CHANDRASEKHAR, an internationally renowned demographer and family planning specialist, designed India’s population policy and was in charge of organizing the world’s largest official family planning program during the time he was Minister of Health and Family Planning for Madam Indira Gandhi’s administration. Dr. Chandrasekhar received his training from the Madras Presidency College, the University of Madras, Columbia and New York Universities, and the London School of Economics. Formerly Vice-Chancellor and President of Annamalai University in India, he recently served as Visiting Distinguished Professor of Demography.
Loading...
or
Not Currently Available for Direct Purchase