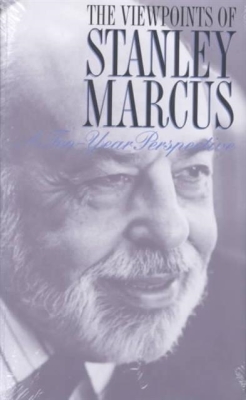 The Viewpoints of Stanley Marcus

Stanley Marcus spent most of his life not only creating a retailing enterprise renowned throughout the world as the epitome of quality, but also raising the level of taste of all who desire “the better things in life.” In doing so, he played a key role in making Dallas itself a success.

His common sense, down-to-earth viewpoints have appeared in The Dallas Morning News for a decade. His feet-on-the-ground, insider's views on the city of Dallas are gathered in this collection which comments on the international world as well. His opinions cover topics from airlines to business, from biscuits to politics, from education to manners.

STANLEY MARCUS, Chairman Emeritus of the Neiman Marcus stores, received a B.A. degree from Harvard University and also attended Harvard Business School. A noted lecturer who published fine press miniature books out of The Somesuch Press, he wrote Minding the Store, Viewpoints of Stanley Marcus, and Stanley Marcus from A to Z all from the University of North Texas Press.
Loading...
or
Not Currently Available for Direct Purchase