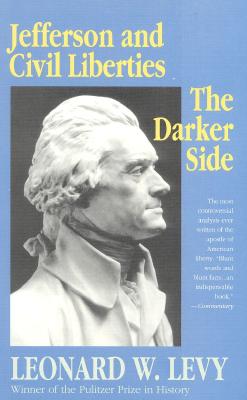 In the most controversial analysis ever written of the apostle of American liberty, the distinguished constitutional historian Leonard W. Levy examines Jefferson's record on civil liberties and finds it strikingly wanting. Clearing away the saintliness that surrounds the hero, Mr. Levy tries to understand why the "unfamiliar" Jefferson supported loyalty oaths; countenanced internment camps for political suspects; drafted a bill of attainder; urged prosecutions for seditious libel; condoned military despotism; used the Army to enforce laws in time of peace; censored reading; chose professors for their political opinions; and endorsed the doctrine that means, however odious, are justified by ends. Implicitly, Mr. Levy writes, this book is a study of libertarian leadership in time of power and time of danger...Jefferson should be seen by his biographers] as a whole man in the perspective of his times, but my task is to determine the validity of his historical reputation as the apostle of liberty. Blunt words and blunt facts...an indispensable book.--Commentary.

Leonard W. Levy, whose Origins of the Fifth Amendment won the Pulitzer Prize in history, is formerly Earl Warren Professor of Constitutional History at Brandeis University and Andrew W. Mellon All-Claremont Professor of Humanities and History at the Claremont Graduate School. His other writings, many of which have also won awards, include The Palladium of Justice, Blasphemy, The Establishment Clause, Freedom of the Press from Zenger to Jefferson, Original Intent and the Framers' Constitution, and Jefferson and Civil Liberties. He lives in Ashland, Oregon.
Loading...
or
Not Currently Available for Direct Purchase