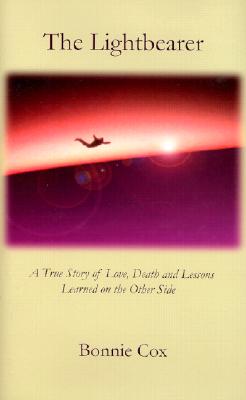 A True Story of Love, Death, and Lessons Learned on the Other Side

After a failed marriage, Bonnie Cox fell in love with Michael Jenkins, a sport parachutist--a skydiver--and photographer who earned his living photographing other skydivers. On assignment for a TV show, he was killed on a jump. The Lightbearer is the story of Bonnie's and Michael's love. Bonnie had had psychic ability since childhood. After Michael's death, she found that she was able to talk with him, even to visit him, on the Other Side. She discovered, among other things, that she and Michael had been husband and wife in a previous life. The lessons she learned on the Other Side endowed her with a profound spirituality and finally enabled her to accept her loss. This is an intelligently written book that will appeal to both the spiritual and the skeptic.

Prior to her introduction to the Other Side Bonnie Cox had occasional psychic experiences. As a teenager, she saw, superimposed on her father's face, the face of her grandmother at the moment of her death, three hours before the family was notified. At age thirteen, as recounted in the prologue to The Lightbearer, Bonnie had a near-death, out-of-body experience when her heart stopped for two minutes during spinal surgery. She has appeared on the TV show, The Other Side, where she discussed her relationship with her deceased fiance, and has been a guest speaker on the near-death experience at colleges in southern California.

Praise For The Lightbearer: A True Story of Love, Death, and Lessons Learned on the Other Side…

“The Lightbearer is a memoir of life, death and coming back. Bonnie Cox has given us a page-turner that is exhilarating, inspirational, beautiful and true.” — Metaphysical Reviews

“The Lightbearer is a profound and insightful journey past the veil of death itself.” — The Midwest Book Review