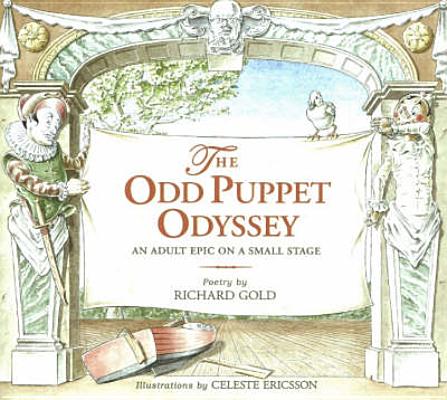 The Odd Puppet Odyssey is an illustrated (six four-color illustrations) series of narrative poems. Reading as parables, they are poems for adults about the voyage of two puppet characters, Pongo and Rico. In the course of their journey, they explore identity, sexuality, adulthood, relationships and some of the social forces that affect them and their world. Recalling Homer's Odyssey as well as The Epic of Gilgamesh, Collodi's The Adventures of Pinoccio, and Lewis Carroll's Alice's Adventures in Wonderland, Pongo and Rico travel down a rabbit hole to meet Death in Wonderland, are chased by the Hairy Monster of Manhood, and climb through the interior of a giant model of themselves. Leavened with humor and irony, this book is a picaresque story of self-acceptance and growth. Celeste Ericsson, the illustrator, worked in tandem with the author, so that poems and illustrations evolved together. The artist has been influenced by Renaissance and Baroque art, the commedia dell'arte and the satirical etchings of James Gillray.

Richard Gold founded and runs the Pongo Teen Writing Project, based in Seattle. Through Pongo, the author goes into jails, homeless shelters, and psychiatric hospitals to help adolescents write about their lives. This experience has clearly informed The Odd Puppet Odyssey.

Praise For The Odd Puppet Odyssey…

"Enhanced with six full-color illustration by Celeste Ericsson, The Odd Puppet Odyssey is a series of fifteen narrative poems by Richard Gold telling the story of Pongo and Rico, two memorable puppet characters. The satirical pieces are meant for adult readers, as they explore such images as the malevolent presence of Geppetto, sexuality, relationships, identity, and the powerful social forces that shape views of themselves and the world. Sometimes dark or crude, often with keen psychological insights, and bearing a penetrating message about the quest for understanding, The Odd Puppet Odyssey is unique, thought-provoking, and unforgettable. “And as the search goes on / Peeko’s doing not bad / except for the fact he despises / for all the love he rejects along the way / and all the little things he’s hurt, / which may be the same thing.” — Midwest Book Review, August 12, 2004
or
Not Currently Available for Direct Purchase
Copyright © 2020 American Booksellers Association