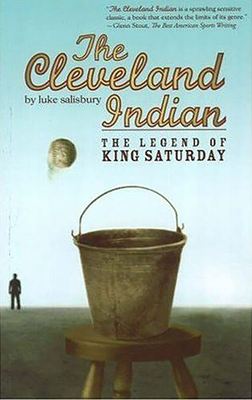 It's the end of the 19th century and the basepaths are alive with legendary players such as John McGraw and Honus Wagner. Cy Young is on the mound and King Saturday (the Cleveland Indian) is at bat. The kranks, or fans, are rooting for action. The Cleveland Indian brings to life the bawdy, often sinister, final days of the Gay Nineties. Against this panorama, the author fields an authentic 1897 Cleveland Spiders lineup, a team as colorful as its era. King Saturday, modeled on real-life baseball legend Sockalexis, the Indian outfielder who gave the Cleveland ball club its name, is a con man, a drunk, a brawler, a hero, a schemer, a murderer, and possessor of the most talent any baseball man ever saw.

Luke Salisbury is the author of The Answer Is Baseball and three works of fiction: The Cleveland Indian, Blue Eden, and Hollywood & Sunset, which was selected as Book of the Year by Online Review of Books & Current Affairs; won Best Historical Fiction 2006 from USA Book News; and was a finalist for ForeWordMagazine's Book of the Year for General Fiction.

Praise For The Cleveland Indian…

"A Penobscot Indian with a terrific arm and flexible morality takes Cleveland’s baseball team briefly to the top of the league in the 1890’s. The salaries were a tiny fraction of today’s, and Cleveland was in the National League, but even then there were gifted players who gambled and lawyers who would rather sit in the grandstands than in a courtroom. Henry Harrison is among the latter, a well- born but impoverished Ivy League graduate dazzled by the throwing arm, hitting skills, and romantic talents of Louis King Phillip Saturday, a half-ugly half-Indian from Maine. Saturday is signed by the Cleveland Spiders, who also hire Harrison as their lawyer. Harrison’s primary duty is to keep an eye on his wild friend–an assignment that introduces him to the seamier side of the Cuyahoga River. It does not take Harrison very long to discover that Saturday sees nothing wrong with betting on baseball, including his own games, and Henry finds himself willingly holding the bag and becoming Saturday’s business partner. Saturday’s such a good player and such a good gambler that the bag begins to fill up fast, and Harrison’s ambition to own his very own professional team begins to seem possible. Another similarity to today’s sport: worshipful women. In addition to managing the money, Harrison must keep Saturday’s admirers in order. Alas, Harrison himself fancies at least one of the ladies. When the glorious season with the Spiders spectacularly ends, Saturday, whose gambling has become an open secret, must take it on the lam to Cuba, Mexico, and Colorado. Standard Oil, of all things, figures into the action at every turn. Salisbury (the nonfictional The Answer is Baseball, 1989) offers brisk fun for the Bart Giamattis of this world." — Kirkus Reviews, Copyright ©1992, Kirkus Associates, LP. All rights reserved.