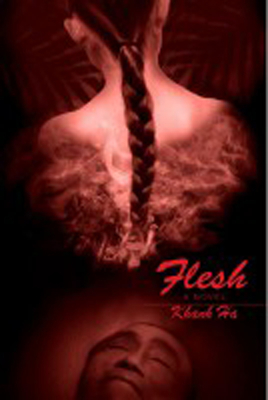 The setting is Tonkin (northern Vietnam) at the turn of the 20th century. A boy, Tai, witnesses the beheading of his father, a notorious bandit, and sets out to recover his head and then to find the man who betrayed his father to the authorities. On this quest, Tai's entire world will shift. FLESH takes the reader into dark and delightful places in the human condition, places where allies are not always your friends, true love hurts, and your worst enemy may bring you the most comfort. In that emotionally harrowing world, Tai must learn to deal with new responsibilities in his life while at the same time acknowledge his bond, and his resemblance, to a man he barely knew-his father. Through this story of revenge is woven a another story, one of love, but love purchased with the blood of murders Tai commits. A coming-of-age story, but also a love story, the sensuality of the author's writing style belies the sometimes brutal world he depicts.

“‘Flesh’ is a strong addition to any historical fiction collection, much recommended.” — Midwest Book Review

“In this dark, violent, and poetic saga, with disjointed cinematic vignettes that make it often read like a screenplay, characters are not who they seem. While this makes for a thrilling finale, what lingers . . . is Ha’s descriptive prose.” — Publisher’s Weekly

“Set in late-nineteenth-century ancestor-worshipping Annam (later to become Viet Nam), Flesh tells the remarkable story of one boy’s quest to reunite his bandit father’s skull with his bones and bury them together in ‘a lucky hole.’ The horrifying opening scene of his father’s beheading is so realistic it make me feel I was in the crowd, watching.

“The story continues with a fascinating journey laced with authentic details of a time and place that used to be, a world of geomancers, spirit dancers, river pirates and opium addicts, of simmering resentment toward converted Catholics, ancient cures like the dead eel rotting in a smallpox victim’s bed, a world where magical burial holes bring fortune to the dead one’s children.

“Author Khanh Ha is particularly good with sounds an smells: from sweat and rain and incense and the smacking of dry lips, to the sounding of the village gong and spicy odor of beetles in the forest.

“Anyone looking for a gripping adventure story combined with a painless history lesson is going to love this novel.” — Joanna Catherine Scott, author of Indochina’s Refugees: Oral Histories from Laos, Cambodia and Vietnam and Charlie: a novel of Vietnam.

“Good historical fiction allows a reader to enter another time and place. However, Khanh Ha’s Flesh goes further, not only creating a rich portrait of late nineteenth century northern Vietnam, but presenting a hero who is entirely a product of that world, violent and tender. His story is more than a period piece. It is grounded in his own loyalties, his desires, and his slow understanding of the secrets of the human heart.

“I was particularly impressed by the voice of the narrator—and he really was a hero—and the way we learned about life then without being told, just by inhabiting his consciousness. The vivid descriptions of things, like the door in that courtyard that keeps appearing, keep coming back to me. I also loved that yellow monkey! But really, none of it could be real to me unless it was tied to that narrator.” — Simone Zelitch, author of The Confession of Jack Straw, Moses in Sinai, and Louisa