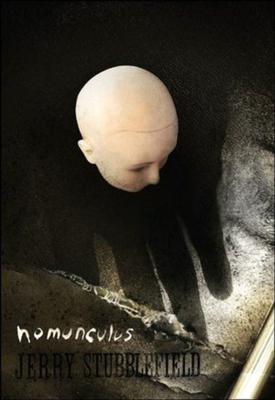 When a man can't achieve intimacy with someone else, such as a wife, he ends up achieving it with himself, which is no good. Hector Owen is well aware of his problem. He's a washed-up playwright whose imagination and creative impulse nevertheless have failed to wane in spite of his efforts to deny them. With a lackluster career behind him and a failing, sexless marriage in the Appalachian town to which he has retreated, Hec suddenly finds himself in the company of his own creation, a nasty, yet frequently charming homunculus calling himself Robin. And Robin, once freed from his lifetime of confinement within Hec's over-stressed mind/body, has a dangerous agenda that includes sex, love and ridding Hec of his lovely wife. Both literary and science fiction, Homunculus moves the Frankenstein proposition into the realm of psychosis. Is Dr. Frankenstein more culpable for the terrifying actions of his electrically energized monster than Hector Owen is for those of the glib, droll homunculus to whom he's given birth?

Jerry Stubblefield is a sixties survivor, experienced in hallucinations of various kinds and able to walk comfortably next to realities unshared with the neighbors. The playwright-turned-novelist graduated from the drama school at the University of Texas at Austin and is a recipient of the Samuel French Award. He is a member of the Ensemble Studio Theatre and studied under renowned playwrights Arthur Miller, David Henry Hwang and Wendy Wasserstein. He currently teaches creative writing and playwrighting in Asheville, North Carolina, where he lives with his wife and daughter. His son is musician Nick Stubblefield.

"Unemployed playwright Hector Owen’s few theatrical successes are long behind him. Languishing at home while his emotionally distant wife earns a paycheck, he still manages to keep his eccentric imagination running at fever pitch. One night, after enduring a protracted bellyache, he watches as a slimy little man, or homunculus, crawls out of his navel and burrows under the bed. Cleaned up and kept hidden from his wife and neighbors, the homunculus, who calls himself Robin, quickly becomes a much-needed friend and sounding board for Hector’s creative and sexual frustrations. But Robin has a nasty side that personifies Hector’s repressed urges, including one that may involve avenging an early marital wound and plotting to murder his wife. Stubblefield draws on his own playwriting experience to deliver crisp dialogue and penetrating character studies. Despite its horror-genre motifs, Homunculus is a psychologically probing tale of a dysfunctional marriage’s effect on literary ambitions, and its portrait of neurotic impulses made flesh is one readers won’t soon forget." — Carl Hays, Rapid River, May 2009

“Little men don’t just come out of your body without a pretty good reason.”

I know [this author] personally, am fond of [him] and have great respect for [his] work. So this will be more a report than a review and an introduction to those of you who may not know [his] work. I knew Jerry Stubblefield as a playwright many moons ago. And his novel “Homunculus” (Black Heron Press) is about a playwright who lives in Asheville. It is my fervent hope that the resemblance stops there. What a beautifully crafted and deeply weird book. For once, you really can judge a book by its cover—the art here is striking and slightly disturbing.

“Homunculus” is about the little manikin that is born—along with some graphically nasty goo—from Hector Owen’s navel. The little man’s name is Robin and I could almost hear a diminutive Alan Rickman delivering his sarky, funny lines. The publisher’s blurb intimates that this is science fiction or horror but the author disagrees somewhat and I have to side with him. It’s a psychological exploration of someone you can’t like very much, even if he is tormented by his little creation. The book does have a creeping-dread quality but never leaps over the fence into the horror genre. The slow build from the discovery of the hypodermic needle in the still-packed boxes to the murderous attentions of the little man towards Owen’s wife is eerie and very well done. But the larger story is about Hector and Robin and who they are to each other.

It’s about how we set ourselves up for failure, then deal with it (or not) and about the lack of true intimacy that has become a hallmark of the early 21st century…" — H. Byron Ballard