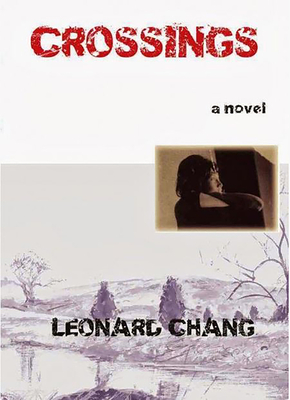 Crossings takes an unflinching look at the lives of Korean immigrants, legal and illegal, in the San Francisco Bay Area. This novel centers on Sam, a widower, who finds himself in debt to a local gangster and Unha, an illegal immigrant working at a nightclub. Intertwined with their lives are the lives of other characters-family members, other immigrants, gangsters. Together they form a portrait of a community struggling to better itself. When Unha rebels against the stringent demands placed on her, she is kidnapped and and trafficked into prostitution and Sam is determined to save her.An ensemble novel, [i]Crossings[/i] is a mosaic of stories about the American dream.

Leonard Chang was born in New York City and raised on Long Island. He attended Dartmouth College and received his BA in philosophy from Harvard University, and his MFA in Creative Writing from the University of California, Irvine.

"Sadness and irony pervade Chang’s story of Korean immigrants in California. Widower Sungmo, known as Sam, grieving and drinking heavily, is deeply in debt from his beloved wife’s cancer expenses, not to a bank but rather a local gangster boss, Mr. Oh. Without a viable alternative, the quiet carpenter must work off his debt as a hired thug, side-by-side with a far more experienced miscreant. Though Sam marries recently arrived Yunjen, whose mixed-race heritage is a curse back in Korea, he and his 11-year-old, David, find little solace in her. But when Sam sees Unha hostessing in one of Oh’s restaurants, he’s struck by her resemblance to his deceased wife. That sets in motion a chain of events, including Unha’s kidnapping and forced prostitution, that ends in murder for some, success for others. This sad, sweetly lyrical depiction of family loyalties and responsibilities, brother betraying brother, and love the second time around is so eminently readable that its lack of standard American punctuation is no obstacle to enjoying it." — Whitney Scott, Booklist

"Leonard Chang’s newest novel CROSSINGS depicts the darker side of the American Dream for Korean Immigrants. In the underbelly of San Francisco, two deperate lives collide with tragic consequences. Sungmo, called Sam, is still grieving over his wife Sunny, whom he lost to cancer. He barely has time for his second wife, Yunjin, a honhyol (mixed race Korean), and his son David.

To pay for his wife’s medical expenses, Sam goes into debt to the local crime boss, Mr. Oh. Unable to pay him back, Sam is recruited as a hired strong arm and backup to Im, Oh’s brutal enforcer. Unha, an illegal from Korean, is forced into the life of an indentured servant. Her ability to speak English gets her a job as a hostess in one of Oh’s nightclubs, and saves her from prostitution, unlike the other girls who came with her. One evening, Sam and Unha meet at Oh’s club. It is a fateful meeting. Sam is struck by Unha’s resemblance to his late wife. This sets off a violent chain of events.

Chang’s writings in Asian American literature have consistently focused on the Americanized Korean experience. In his crime trilogy, the Korean American detective Allen Choice is the educated, assimilated American of Asian heritage. This is Chang’s niche in his character-driven works, with a distinct perspective in ethnic identity, storylines and themes.

Chang has a lean, muscular style, with a proclivity toward the noir. CROSSINGS actually steps back to the first generation or fresh-off-the-boat Korean experience. He describes people who are easy prety to local crime bosses; who quickly become victims of sex trade. These Koreans live below the radar. Whatever hopes they had coming here, the American Dream quickly becomes a perverted and twisted nightmare.

The scenes with Minji, another illegal, as a sex worker in a massage parlor are so brisk, you can’t really be sorry or angry. A more expanded passage of an Asian sex worker and her john could easily spill over into a maudlin, stereotypical scene. There is racism and cruelty, but it does not become a social or political platform with Chang at the helm. That’s not where he takes you.

In his short stories and with each consecutive novel, Chang continues to hone his craft, becoming more refined in his writing. It’s not just the structure of his stories or the memorable characters, it’s more about style. In CROSSINGS, the construction of his phrases are economic, yet powerful. He creates passages with cold realism and little sentiment. When Im orders Sam to punch a girl out in front of the other illegal Korean workers, all Sam can do is tell the girl to close her eyes. No more words are required. The reader knows what comes next; the brutality of a big man’s fist against a girl’s soft face. Chang deftly sets the pace and mood. It never feels like manipulation, just the stylish writing of a master at work.

In his Allen Choice detective trilogy, there is a cool toughness with touches of humor. In CROSSINGS, Chang strips everything down to the simplest and most basic. It’s noir — unsentimental, cruel, and ironic.

CROSSINGS is a bristling novel of misplaced honor and loyalties, family betrayals, love and salvation among people living, literally, in another America. This novel is a showcase for Chang’s mature and confident writing ability. He continues to carve out a unique place in exploring the Korean American experience, a storyteller in a league all his own." — Bill Drucker, Korean Quartlery, Winter 2010