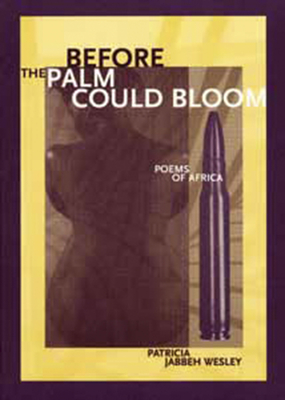 Before the Palm Could Bloom

In Before the Palm Could Bloom, Patricia Jabbeh Wesley writes poems of the Liberian civil war and of the devastation it has wrought: 200,000 dead –– including 50,000 children –– and 750,000 citizens forced to take refuge in neighboring countries. And in poems of village life and customs, the city life of Monrovia, the rites of childhood and adolescence, Wesley records for the reader a world that has been forever changed. Wesley’s poems incorporate many African voices, and range in tone from sorrow and longing, to humor and ironic wit. Wesley teaches African literature and other subjects at colleges in southwestern Michigan, where she now lives with her husband and four children.

Poet PATRICIA JABBEH WESLEY was born in Monrovia, Liberia, and raised there and in her father’s home village of Tugbakeh, where she learned to speak Grebo in addition to English, the national language. In 1991, Wesley immigrated with her family to southern Michigan to escape the Liberian civil war. She earned a BA at the University of Liberia, an MS at Indiana University, and a PhD at Western Michigan University. The author of several collections of poetry, including Where the Road Turns (2010), The River Is Rising (2007), Crab Orchard Series in Poetry–winner Becoming Ebony (2003), and Before the Palm Could Bloom: Poems of Africa (1998), her poems have also been featured in former US Poet Laureate Ted Kooser’s syndicated newspaper column, “American Life in Poetry.” Additional honors include the Victor E. Ward Foundation Crystal Award for Contributions to Liberian Literature, an Irving S. Gilmore Emerging Artist Grant from the Kalamazoo Foundation, an Art Fund Individual Artist Grant from the Arts Council of Greater Kalamazoo, and a World Bank Fellowship. She lives with her family in west-central Pennsylvania and has taught at Pennsylvania State University and Indiana University of Pennsylvania.
Loading...
or
Not Currently Available for Direct Purchase