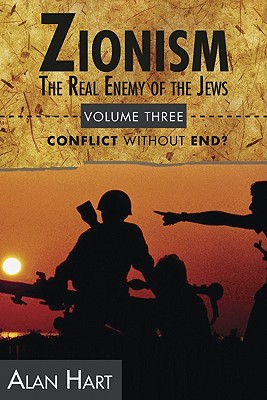 Real Enemy of the Jews V3

This is the third volume in the series ZIONISM, THE REAL ENEMY OF THE JEWS, an epic journey through the propaganda lies and the documented truth of history of the conflict in and over Palestine that became Israel. Conflict Without End? takes the story from the 1967 war and the creation of a Greater Israel right up to the present and the question: Will President Obama be allowed to deliver an acceptable amount of justice for the Palestinians in order to achieve peace for all-and if he can't deliver, is a final round of Zionist ethnic cleansing inevitable? The compromising of Security Council integrity, author Alan Hart argues, is the key to understanding everything that has happened since the 1967 war. By allowing Israel to violate international law and settle the Occupied Territories, the major powers, led by America, effectively created two sets of rules for the behaviour of nations-one for all the nations of the world minus Israel and the other exclusively for it. Hart enables readers to grasp how PLO Chairman Yasser Arafat risked everything, including his life, to persuade first his leadership colleagues and then his people to accept his policy of compromise and peace on terms which any rational government and people in Israel would have accepted with relief. This third volume also includes insights Hart gained while acting as the linkman in a secret exploratory dialogue between Arafat and Israel's Shimon Peres who, at the time, was the leader of the main opposition Labour Party, hoping to deny the Likud's Menachem Begin a second term in office. The story of this mediation effort and of Sharon's blood oath reveals why making peace may be a mission impossible for any Israeli leader, without sufficient outside pressure. Possible?" Hart suggests the changes that must be made in America if any occupant of the White House is ever to be free to make the peace.

A former ITN and BBC Panorama correspondent, Alan Hart has a vast amount of first-hand knowledge of the conflict in and over Palestine. Over more than three decades he enjoyed intimate access to many of the leaders on both sides, and in particular, Golda Meir, Mother Israel, and Yasser Arafat, Father Palestine. Hart's book Arafat, Terrorist or Peacemaker?, first published in 1984, invited readers to consider the proposition that the PLO leader was ready, willing and able to make peace on terms which any rational government and people in Israel would accept with relief. Hart was also a participant at leadership level in the secret politics of the search for peace (as an intermediary between Arafat and Israeli opposition leader Shimon Peres when it was presumed that Peres would become prime minister
or support indie stores by buying on
Copyright © 2020 American Booksellers Association