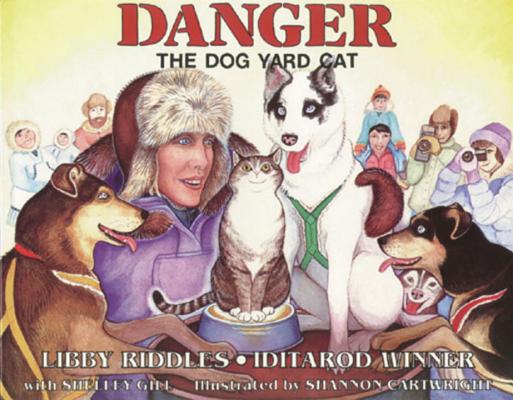 In 1985 Libby Riddles became the first woman to win the grueling 1049-mile Iditarod Sled Dog Race from Anchorage to Nome, Alaska. She won after risking her life in a dangerous winter storm that swept across the sea ice of Norton Sound, pinning her team down for hours. Now she introduces us to her cat, Danger, the coolest lead cat in Iditarod history, in this whimsical and musical tale of the far north. Libby lives with 11-year-old Danger and 57 sled dogs a few miles out of Nome.

Ages 5 and up. This book is part of PAWS IV Publishing.

Libby Riddles is the first woman to win the grueling 1,049-mile Iditarod Sled Dog Race. She currently lives in Homer, Alaska, and her Blazing Kennels has 28 sled dogs. After three summers in Juneau developing the number one rated “heli-mushing” tour, she is now one of the main Alaskan presenters for Princess Cruises, and enjoys being one of the leading representatives of her sport to the thousands of visitors every summer.

Shannon Cartwright has spent most of her Alaska years living in the bush. Cartwright has traveled all over the state working on a set-net site in Bristol Bay, driving horse-pack trips, guiding in the Alaska Range and Brooks Range, researching book projects, and traveling between her cabins by train, skis, snowmobiles, and horses. She expresses her love of Alaska through the 28 children's books she has illustrated, seven of which she has also written.
Loading...
or
Not Currently Available for Direct Purchase