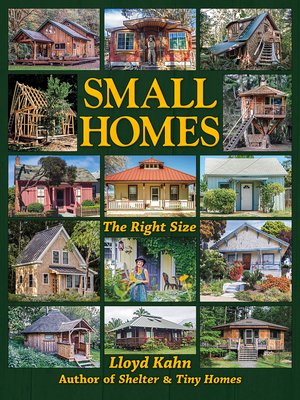 From the publishers of a popular series of building books comes Small Homes, which is highly relevant for these times -- getting smaller, rather than larger. Some 75 builders share their knowledge of building and design, with artistic, practical, and/or economical homes in the United States, Canada, England, Scotland, France, Germany, Spain, New Zealand, and Lithuania.

Compared to the average American home, small homes are less expensive, use less resources, are more efficient to heat and cool, and cheaper to maintain and repair. Compared to tiny homes, they offer a lot more space and breathing room.

They are desirable for people who want to avoid a bank mortgage or high rents, yet need more room than a tiny house affords.

They vary from unique and artistic to simple and low-cost. Some are plain, ordinary buildings that provide owners shelter at a reasonable cost -- and some are inspiring examples of design, carpentry, craftsmanship, imagination, creativity, and homemaking.

Some are built with "natural materials," such as cob or straw, some with recycled wood or lumber milled on-site, some are old homes that have been remodeled, and many are designed and built from scratch by the owners. Many are in the country, some in small towns, and some in large cities.

It's all in the hands.

The underlying theme with Shelter's books, which cover an over-40-year span, is that you can create your own home with your own hands, using mostly natural materials.

And note: A computer can't build your home for you. You still need a hammer (or nail gun), a saw -- and human hands.

Lloyd Kahn started building his own home in the early '60s and went on to publish books showing homeowners how they could build their own homes with their own hands. He got his start in publishing by working as the shelter editor of the Whole Earth Catalog with Stewart Brand in the late '60s. He has since authored six highly-graphic books on homemade building, all of which are interrelated. The books, "The Shelter Library Of Building Books," include Shelter, Shelter II (1978), Home Work (2004), Builders of the Pacific Coast (2008), Tiny Homes (2012), and Tiny Homes on the Move (2014). Lloyd operates from Northern California studio built of recycled lumber, set in the midst of a vegetable garden, and hooked into the world via five Mac computers. You can check out videos (one with over 450,000 views) on Lloyd by doing a search on YouTube: http: //www.youtube.com/results?search_query=lloyd+kahn> Lloyd lives in West Marin County, California.
Loading...
or support indie stores by buying on