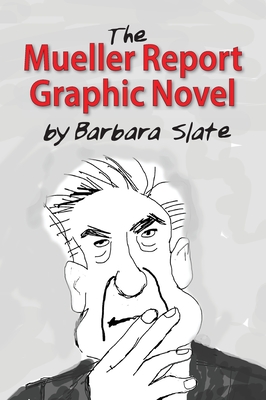 Marvel and DC comics creator Barbara Slate makes the Mueller Report fast-paced, easy-to-read, and entertaining. She selects crucial text from the two volume, 448 page report that was issued by the Department of Justice in April, 2019 and weaves a riveting visual story of secret agents, hackers and political manipulators, deceit and comical cover-ups. It stays true to the facts in the Report on the Investigation into Russian Interference in the 2016 Presidential Election (Volume 1) and the Investigation into Obstruction of Justice (Volume 2). The Mueller Report Graphic Novel contains both volumes and is 108 pages.

"A surprisingly good-natured but thorough adaptation of what may turn out to be the most astounding story of American corruption in plain sight ever told."

"Slate has provided something that is half-public service, half-wild ride, both crucial and rollicking."

Barbara Slate created Ms. Liz, a feminist cartoon character, in 1976. Ms. Liz comic strip ran in Cosmopolitan and was an animated segment on NBC's TODAY show for two seasons. Barbara has written hundreds of comic books and graphic novels for DC, Marvel, Archie, Disney: Barbie, Beauty and the Beast, Pocahontas, Betty and Veronica, and created Angel Love, Yuppies from Hell, Sweet XVI, Getting Married and other Mistakes. She is profiled in A Century of Women Cartoonists. Author of You Can Do A Graphic Novel. A resident of Stockport, NY, she travels extensively nationwide as a keynote speaker and teacher.
http://barbaraslate.com
Loading...
or support indie stores by buying on