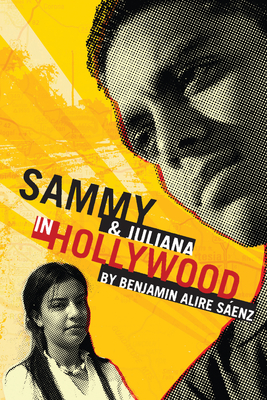 The "Hollywood" where Sammy Santos and Juliana R os live is not the West Coast one, the one with all the glitz and glitter. This Hollywood is a tough barrio at the edge of a small town in southern New Mexico. Sammy and this friends--members of the 1969 high school graduating class--face a world of racism, dress codes, war in Vietnam and barrio violence. In the summer before his senior year begins, Sammy falls in love with Juliana, a girl whose tough veneer disguises a world of hurt. By summer's end, Juliana is dead. Sammy grieves, and in his grief, the memory of Juliana becomes his guide through this difficult year. Sammy is a smart kid, but he's angry. He's angry about Juliana's death, he's angry about the poverty his father and his sister must endure, he's angry at his high school and its thinly disguised gringo racism, and he's angry he might not be able to go to college. Benjamin Alire S enz, evoking the bittersweet ambience found in such novels as McMurtry's The Last Picture Show, captures the essence of what it meant to grow up Chicano in small-town America in the late 1960s.

Benjamin Alire S enz--novelist, poet, essayist and writer of children's books--is at the forefront of the emerging Latino literatures. He has received both the Wallace Stegner Fellowship and the Lannan Fellowship, and is a recipient of the American Book Award. Born Mexican-American Catholic in the rural community of Picacho, New Mexico, he now teaches at the University of Texas at El Paso, and considers himself a "fronterizo," a person of the border.


Praise For Sammy & Juliana in Hollywood…

"His message is one of victory through endurance rather than escape, as Sammy finds ways to define himself and maintain his loyalties while circumstances prevent him from leaving the barrio. Even readers far removed from the poverty and prejudice that define his world will see this facet of the Mexican-American experience with empathy through Sammy’s eyes." —The Bulletin of the Center for Children's Books, starred review

"The barrio setting is as palpable as the wings that beat against Sammy's insides when danger lurks. The tough but caring family, neighbors, and friends speak in authentic dialogue liberally laced with Spanish that adds texture to the story, and an empathetic teacher and a stand against the school dress code provide a small victory to help Sammy weather the racism and poverty that fuel his emotions and his losses." —Booklist

"Written in a poetic first-person voice that incorporates some Spanish into the narrative, Sammy’s story of love, loss, and strong family ties is hard to forget." —Horn Book

"Expletives appear throughout as do large helpings of Spanish, without italics and not always with English echoed afterward, in perfect keeping both with Sammy's world and his self-perception. His hopes and plans for a better life, beyond the hold of Hollywood are poignant and palpable. This is a powerful and authentic look at a community's aspirations and the tragic losses that result from shattered dreams." —School Library Journal

"In natural, lucid prose, Sáenz captures Sammy's half-formed thoughts, expressed in sentence fragments, and the confusion and uncertainty of an introspective, introverted boy on his path towards becoming a man. Sáenz' has an ear for dialogue, not just the idiosyncratic phrases and expressions that characterize the residents of Hollywood, but also the way that Sammy narrates his tale, in a poetic, lyrical manner that begs to be read out loud and shared with others, placed in the hands of anyone who's ever struggled with the confusion, loss, and contradictions that come with saying goodbye." —San Antonio Current

"Sammy & Juliana comes straight from the streets and the times. Sammy just isn’t on the cusp of manhood, he’s on the edge of an often violent and frustrating world that demands difficult choices and sacrifice. And Sáenz’s lyrical prose provides the soundtrack to that tumultuous life borne of the barrio of a small town." —San Antonio Express-News

"Top picks for the year include Sammy and Juliana in Hollywood by Benjamin Alire Sáenz…Set in the barrio of a New Mexico town during the Vietnam war, this heart-rending story of love and loss follows Sammy Santos through his senior year of high school. The gritty details about drugs, sex, domestic violence, the liberal doses of Spanglish, even the profanity, make this story feel like an authentic portrayal of what it meant to be poor and Chicano in America in the 1960s." —Miami Herald

" It is one of the best Viet Nam era novels for this age I have read. The love story, though over rather early in the book, is very sweet. I particularly liked the relationship between Sammy and his father. We do not often see books for this age where kids genuinely respect and love their parents." —Children's Literature

"This is a sober, moving, coming-of-age story…[Young adults] of today can relate. Excellent for cultural studies." —KLIATT

"The verisimilitude of teen angst, speech and behavior is what makes Sammy & Juliana in Hollywood a powerful reading experience. Honest and heartfelt, this is an extraordinary book." —El Paso Times

"Please do yourself and your students a favor and search for this beautiful work of art…Sammy & Juliana in Hollywood deserves top billing in our school libraries. Find it! Buy it!" —Michigan Reading Journal

"Saenz never overdoes it. Like a ballerina whose graceful dancing effortlessly belies her athleticism, Saenz writes as if he is merely documenting the lives of a small segment of America, lifting the cover for us to peer down on the struggles of this group of young adults as they play out before us." —El Paso Inside & Out Magazine

"While the many deaths are depressing, the ultimate message is how hope and memory combine to free even the most tormented soul. Readers who speak Spanish will enjoy the juxtaposition of two languages throughout the novel." —Paper Tigers